What Number Seven Taught Me

In the last days of December 2017, a friend pointed me toward a writing competition. The theme for the competition was “Awakenings”. The group that posted the competition welcomed all genres, with a great desire for romance and speculative fiction, among others. I’ve written romance in many forms over the years, from the simple to the unapologetically raunchy. I had only a few days before the deadline, but I’d come up with – what I thought at the time – a straightforward love story set in a pseudo-familiar setting, and one I could finish pretty quickly.

Then I actually started to write it.

What poured from my brain was a twisty-turny, upside-down-reality tale of love, duty, patriotism, relationships, even politics(!) that took nearly a full five months to finish. It wasn’t what I had first planned, and it veered a lot from my original plot. But one lesson I’ve learned through writing fiction is that, when I allow the characters to speak freely, they will forge their own path. More often than not, that path is more satisfying than any I may have planned at the start.

Seven, like so many of my original characters, embraced his being-ness with so much quiet strength and determination, it overwhelmed me. I could think of no other story or character for those five months I wrote. In fact, writing became almost like transcribing. Many times, it felt like he was standing at my shoulder, telling me who should do what and what should happen next. That letting-go is one of the most joyful feelings I’ve experienced as a writer. 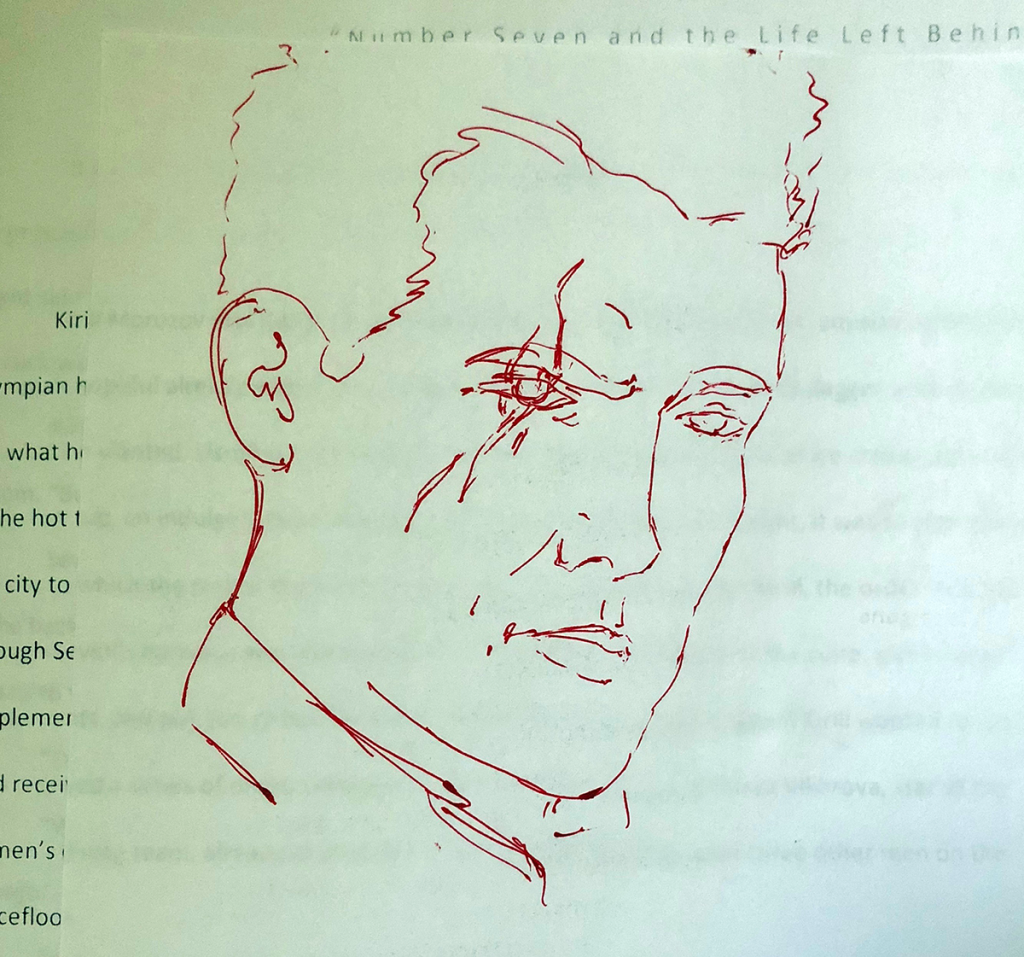 Dour Number Seven, a doodle by me.

I said I wouldn’t apologize for Seven’s story, and I won’t. He took me on a new journey into personhood, one I hadn’t considered before. I grew with him, and because of him. He made me open my eyes a little bit wider to the world around me. He’s a bit suspicious, as I am, and he’s quite the serious individual, as I can be. But he also has to trust himself, a lesson I took to heart along the way, too.

If any of this has piqued your interest, you can read “Number Seven and the Life Left Behind”, part 1, here.

I’ve posted this story for free because it’s a project I want to share with people. I am working on a hardcopy version, and when that’s available, I’ll be sure to share that news. In the meantime, if my story moved you at all, I’d encourage you to take a moment to consider where you are in the world today, and what struggles you see, nearby or faraway, hidden or in plain sight. Everywhere, there are people fighting the good fights: for freedom, equality, and love. This story is for them. And for me, and for you, because we’re all in this together.

A writer rarely creates a story in a vacuum. People influence us in their own ways. Sometimes, that influence makes it onto the page. Sometimes, it helps us just get to the page in the first place.
Thank you to Sue for giving me the impetus to write this story.
Thank you to Chase for joining me for the ride.
Your thoughtfulness and support means a lot to this lonely writer. 🙂