One of my recent Timehop memories was a #TBT / #ThrowBackThursday to my very first 100 Word Challenge for Grown-Ups, from February 2012. At the time, I was deeply entrenched in writing the first draft of “Fearless,” which remains one of my hope-for novels. (It’s currently in draft 2.5, for anyone wondering.) That long-ago 100-word entry was titled “Everyone Loves Neville,” and, if you’re interested, you can see the original at the link. That first writing challenge started me on a path of picking up more over the years. Through those challenges, I learned a lot about the value of words.
There’s a lot in that first foray that I like. There’s also room for improvement. Here’s a second take on that effort, hopefully for the better:

The girl lingered beside him, her chest heaving even though they’d been out of the water for ten minutes. “Thanks for the lesson, Nev.” Her wet lashes flickered at him. “If there’s ever anything I can do…?”

“Just practise,” Nev said, before sending her on her way.

Ross sidled to his shoulder, to stare after the girl swaying up the shore. “You lucky bastard. Everyone loves you!”

Nev looked at him: his friend with the wide, luscious smile and eyes so deep and blue he often dreamt of drowning in them. He sniffed and picked up his board. “Not everyone.”

I tried to set myself to a 100-word story-a-day challenge this past May, but it didn’t pan out. I did manage a few short vignettes which ended up being pretty good, but the lack of readers and feedback quickly deflated my excitement.
There wasn’t much reason to go back and “fix” this bit of short challenge writing, except that Ross, Nev, and the others have been on my mind again, of late, and that Timehop reminder of my first 100WCGU challenge prompted me to revisit sweet, lovestruck Nev. Of course, I can never stop at rewriting just one thing. As it so goes, I’ve also been working on rewrites for lots of my “Finding Mister Wright” short stories (including the one I just sent in for 4amwriter’s Dare to Write summer challenge!), and Highs, Lows, and In-Betweens, the big sci-fi/action team novel from 2014’s NaNoWriMo. But, that’s an update for another day….
Who else out there remembers the 100WCGU challenges? Have you ever challenged yourself with a writing-limit goal? Working on any interesting rewrites, lately? Let me know in the comments! I’d love to know I’m not doing this alone. 🙂

I’m back to Julia’s 100-Word Challenges for Grown-Ups. This week, the prompt has a bit of an Easter theme to it:
…looking at all of that chocolate….
We’re not required to incorporate the exact phrase in this challenge’s 100 words, but I did, because it evokes such a vivid image. Maybe a bit too vivid, though? 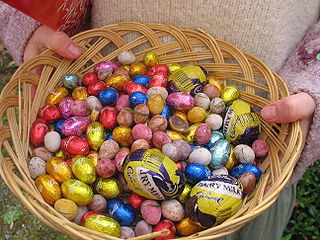 The gift basket was a lovely gesture…but just looking at all of that chocolate made a tide of sick rumble up from her belly to the top of her throat, threatening with a rancid belch she barely caught in her palm in time.

She didn’t notice Wennie crouching beside her in the toilet, not until it was all over. “You want some water?”

Easing back against the wall, she nodded.

She sipped, the cold taste of relief sliding down her throat. And shame.

Wennie gave a tsk. “Have you told him, yet?”

I can’t be the only one who’s felt queasy in this situation. 😉

Did you partake in the challenge, this week? How did that taste to you?

I seem to be ping-pong-ing with my challenges, lately. Hope that’s all right with everyone. If not…well, too bad.

This is week 78 for the 100 Word Challenge for Grown-Ups, provided by Julia’s Place. For this week, Julia says the prompt is:
…what does it taste like…

There were no specific rules about including this phrase in our submissions, so I just ran with the spirit of the prompt.

He smelled clean, electric, like a fresh summer rain that prickled her nostrils every time she drew breath. He felt like it, too: skin slick beneath her fingers, lips wet as he pressed them to hers. His body gave off a flowing heat she felt in wavy vapors as he took her in his arms.

Whispering his desires around their mouths, he pulled her to the ground, plucking gently at her buttons.

She let him do it all. Because she couldn’t go back to the farm. Not after that first kiss, when she’d tasted this fate on his sweet lips.

I’d considered calling this one “A Taste of Things to Come,” but, that just made me think of Shang Tsung.

I have a character who is blind, and, in considering a tale from her point of view, I’ve wondered what it might be like to write a story without using the convention of visual description. A love scene – such as this is – is not particularly difficult, because it’s so much about what is felt, anyway. But, I’m a firm believer in using all senses in description when I remember to do so. This prompt provided some fun practice.

As writers, we paint with words to describe. Most often, those words relate to the visual sense. But, what are your next favorite senses in description?

Only one prompt this time, for 100-Word Challenge for Grown-Ups. This week (76), Julia’s prompt is:

This one came pretty easily to me, as I cranked it out in about an hour. But, then, I think this is likely a situation close to many of our hearts, not just my own…. 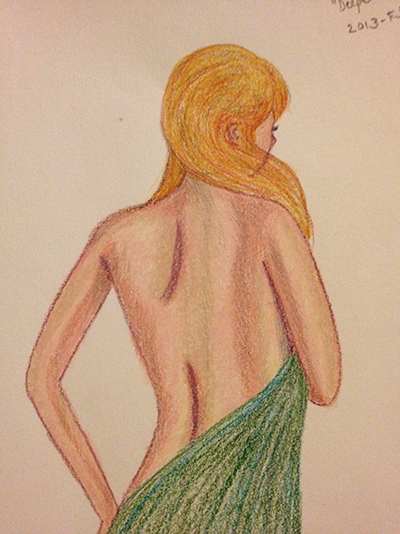 Fixing her gaze on her disrobed reflection, Sally sighed.

What lay beneath the surface was more important, she knew…but, what had happened to that surface? The flat belly, high breasts, slim hips – where had they gone?

The creak and click of the bedroom door, signalling Larry’s return, made her scramble for pants and bra.

His warm, damp embrace stopped her. “Just a mo’.”

Cringing from his tickling hair, she laughed, despite herself. “You’re wet!”

She hummed. “You think?”

He plucked her clothes from her hand; they fell to the floor with his towel. “I know.”

I have some writerly friends who can use this short form of storytelling to weave tales of excitement, danger, whimsy, and mystery. I can manage that, on occasion. Mostly, though, these prompts tend to lead me to more mundane places, such as Sally’s fretting over her aging, motherly body…and Larry’s still-full love of the same.

Writing for these Songbirds often feels like writing my own life (sans the fantastic timey-wimey stuff, of course). Maybe that’s why I keep coming back to them. I suppose I should feel blessed that my life and loves are basically happy. And, I certainly am. It doesn’t exactly make for riveting storytelling, though.

How did you look beneath the surface, this week? Let me know! 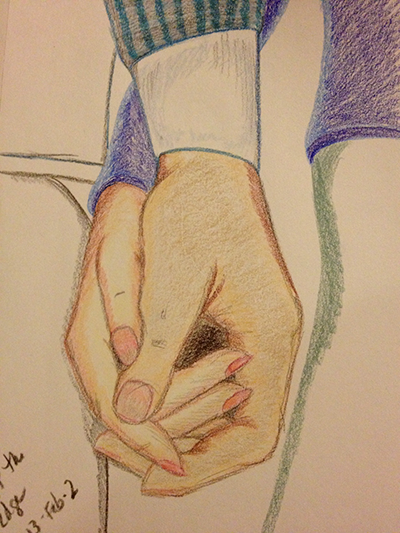