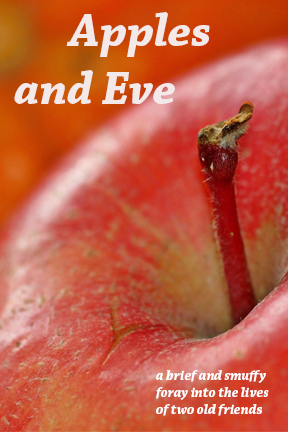 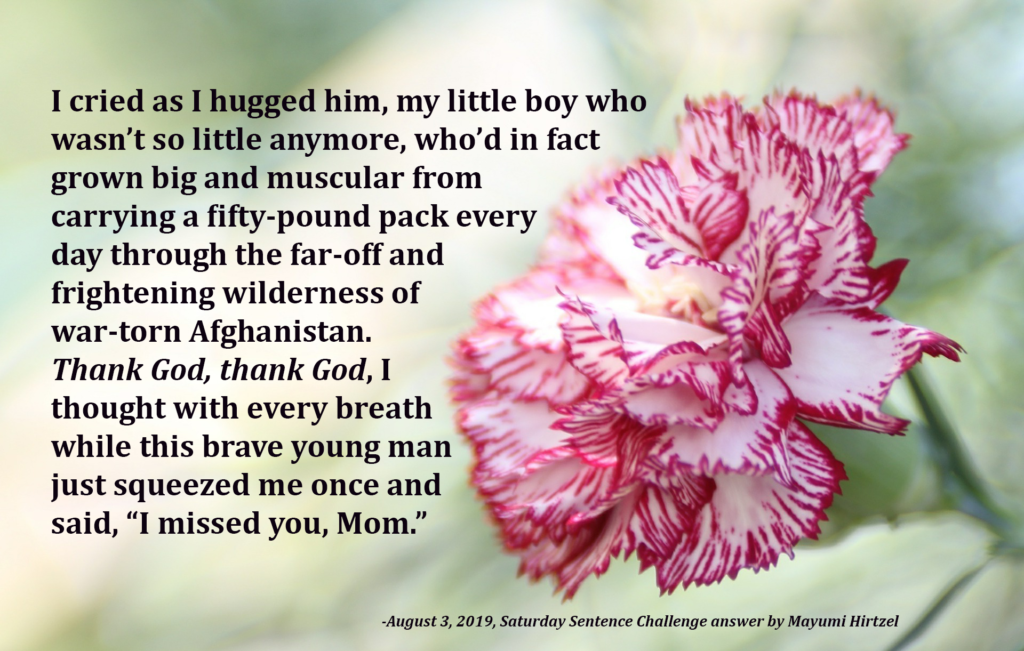 This week’s Saturday Sentence Challenge prompt over at the #TeamWriter Facebook Page was:

I am so very happy to see him come back all in one piece.

The first thing that struck me about this prompt? How the words should evoke a feeling of happiness or relief. However, the sentence construction, which is very stilted, made me feel nothing at all. There’s also the cliche of the phrase “all in one piece.” I believe that cliches become cliches because they’re true. I also think we can use them in our writing, so long as it’s done sparingly and to effect. Or humorously, though satire is a completely separate conversation.

As I’ve mentioned before, I try not to spend too much time on a Saturday Sentence Challenge prompt. Usually, I need at least a few passes before I get the right words. For this one, though, the sentences popped nearly fully-formed into my head on first thought.

Immediately, I knew whose voice I wanted to use for this prompt: June McAllister. June is the mother of one of my “Finding Mister Wright” protagonists, Rob, who spent time in the US Army. I got an image of Rob returning home, and June taking him in her arms. The powerful emotions associated with a mother hugging her son on his safe return home from a tour of duty filled my own heart with sympathetic joy.

I’m actually pretty proud of my answer to this particular prompt, which you can also read below (for sake of text-only accessibility):

I cried as I hugged him, my little boy who wasn’t so little anymore, who’d in fact grown big and muscular from carrying a fifty-pound pack every day through the far-off and frightening wilderness of war-torn Afghanistan. Thank God, thank God, I thought with every breath while this brave young man just squeezed me once and said, “I missed you, Mom.”

Happy writing to you this week, whether it’s your own or prompt-driven! 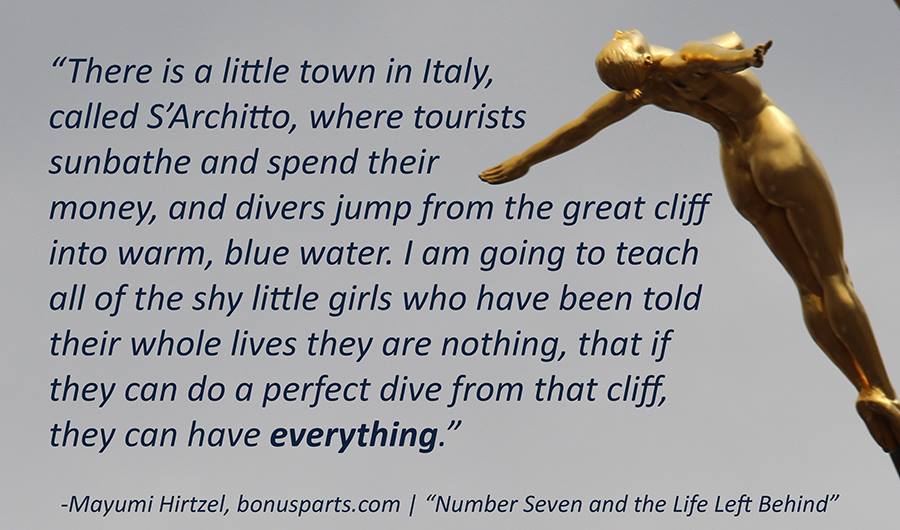 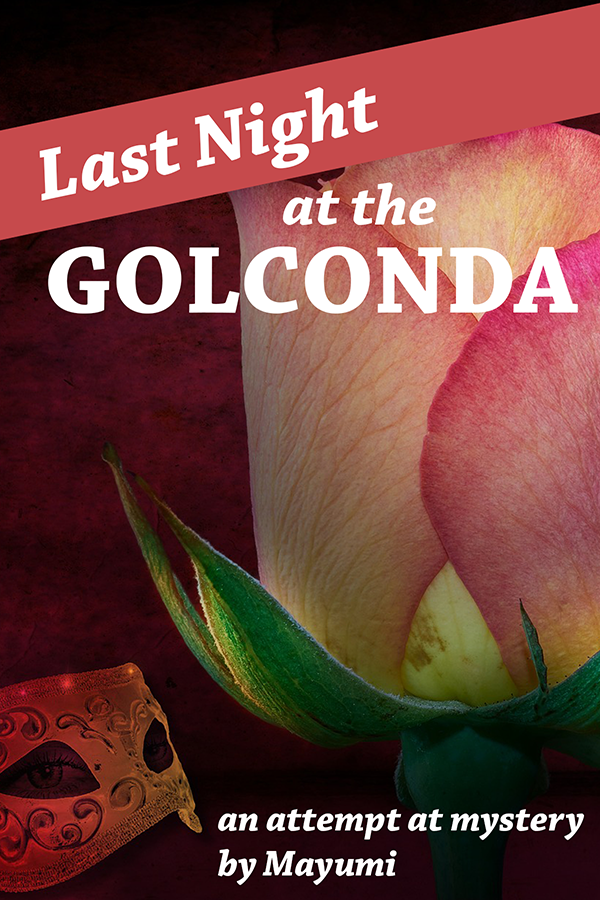 Why I Stopped Writing Fanfiction (for the most part)

Let me start by saying this post is not to pooh-pooh fanfiction or the many writers and readers who enjoy it. I believe fanfiction is a valid and important writing form that produces many wonderful stories that bridge borders and offer opportunities for readers of all types.

That’s not what I’m going to talk about, though.

I think the very first story I ever wrote was a fanfic. For those unfamiliar, fanfiction is stories about characters and worlds already established through media like television, movies, comic books, and videogames. From the rebel hideouts of Star Wars to the high school hallways of Persona 4, I loved wandering through them all. Moreover, I loved the people in them. Their stories sparked a light in me that would often keep me up long into the night, when I would scribble out side stories of my own leading them into new adventures and romances.

Over time, I took an interest in creating my own characters in those worlds: people who could support, antagonize, romance, and challenge the pre-existing characters I already adored. In the fanfiction realm, we call those homemade creations “Original Characters”, or OCs for short.

In the beginning, my OCs were supporting characters only. I felt like readers wouldn’t want to read about my original characters butting into the lives of their well-known favorites. For the most part, that held true. Feedback from readers showed that they didn’t care about the side characters I was creating. Some readers got so offended by my OCs that they wrote me hate mail! I decided the hassle simply wasn’t worth it.

But there was more to my leaving fanfiction than just some petty reader backlash.

The more I wrote my OCs, the more attached I became to them. I realized I loved many of them more than I liked the pre-existing folks. My OCs started to take on lives, loves, and destinies of their own, sometimes completely separate from their source material. After not very long, the fanfiction roots for many of my OCs started to lose their luster. I wanted my characters to be my characters alone, with no ties to someone else’s (read: some company’s) world or story.

In 2017, I began the process of taking down most of my fanfiction. Two years later, only a handful remain on public sites like Fanfiction.Net and AO3. With only 1 or 2 exceptions, nobody seemed to miss them.

Now, it’s not like I don’t care about those stories. I’d spent time and effort – weeks, months, sometimes even years of my life – writing, crafting, drafting, and editing. Still, it felt good to reclaim them from the cavernous depths of the Internet*. Now, they’re just mine. Their being mine allows me to go back and rewrite, repurpose, or just reread at my leisure without the pressure to make them match my current level of skill. That means a lot of them stay ugly and amateurish, but I’m fine with that.

I haven’t completely given up on fanfiction. At the same time that I was taking down other fanfiction stories, I wrote a completely new one based on the Metro:2033 series. I recently revisited my “Doctor Who” Songbirds stories for sharing here. I’m sure my joy will be sparked by some pre-made world or character again in the future. I look forward to it! Until then, I will enjoy and take pride in the worlds and people of my own creating.

To those still writing fanfiction: Keep writing it! There’s a lot of joy and support to be found in the fanfiction writing community. I found and made good friends through sharing those stories.

And for those looking to move from fanfiction to original fiction: You can do it! Your fanfiction writing roots will serve you well in creating your own worlds and characters.

* Nothing is ever completely gone from the Internet, but the stories aren’t easily accessible anymore. That said, there are some stories I’ll never share again, for varying reasons of time, file size, and text.

Have you ever read fanfiction? Written it? What are your favorite fanfiction genres, series, or characters? Let me know in the comments below!