Writing, Responsibility, and the Conundrum of Characters with Guns

Since the first flash of a projectile from a barrel around 1000 CE, the gun has had a rich and varied history across most all avenues of life: social, economical, political, and creative. It also has the power to divide people and opinions like no other tool before or since. Let’s be clear: a gun is a tool. It is specifically designed to make easier the task of killing, of human or other animal. Now, one can certainly use a gun to accomplish goals besides killing – say, destruction of a barn wall, for those not well-versed in the skill of shooting a target – but their primary function is to kill, with more power, speed, and accuracy than any other weapon (assuming said gun is in the hands of an expert).

Politics aside, I have always found guns fascinating, especially their varied designs, and how beautiful they can be. Take a look at the craftsmanship in the Colt below: 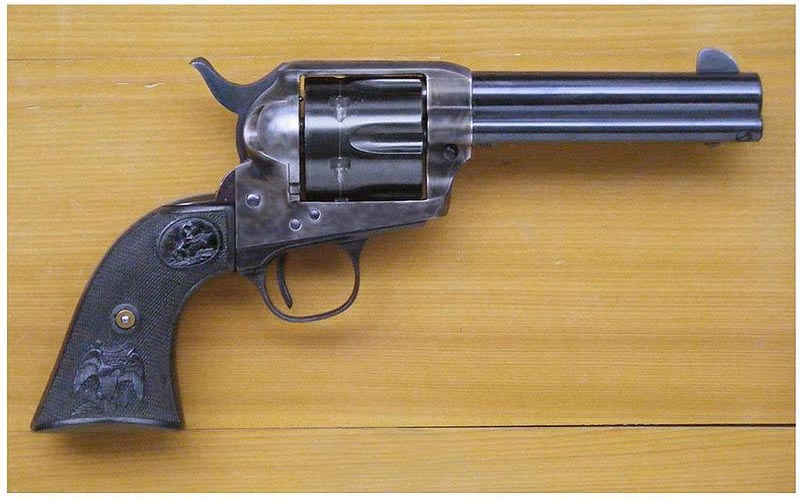 I didn’t grow up around guns, but I had my share of toys for games of ranchers and rustlers with the boys next door, and I talked about them a lot with my father, who’d been an Army sergeant in Vietnam and who’d had an intense respect for firearms and war weaponry in general throughout history. He’d impressed upon me at a young age that guns are dangerous, doubly so if they’re not handled with respect. As I got older, we delved into the specifics of them: “I would much rather you know how to properly use a gun and never have to,” he’d say to me time and again, “than find yourself in a situation where you had to use one but didn’t know how.” He never squelched my interest in them, but he always made sure I understood the inherent danger in them, and the enormous responsibility a person has whenever they pick one up.

I’d written stories with characters who’d used guns since I was a kid: Han Solo’s DL-44 heavy blaster pistol, the Enterprise crew’s type 2 phasers, my D&D-inspired thief’s flintlock pistol. In those early forays, guns were simply weapons of convenience that often made a cool noise or shot a bright laser beam, and I didn’t think much about their impact (pun not intended). It wasn’t until a few years ago, when I wrote the gunsmith in From Hell (A Love Story), that I really thought about what I was saying about guns through my stories when my characters squeezed a trigger. There’s a semi-pivotal moment in the story where this gunsmith and the main character argue about throwing blind cover fire into a crowd of civilians. The gunsmith’s argument is that they’re surrounded by people, while the main character points out, “Yeah, and at least one of them is shooting at us.” The ramifications of their choices follow them through the rest of the book, but it was important to me that both of them realize: odds are good that when you pull out your gun, people will die.

Because I’d grown up being taught to respect – not fear – guns, I wanted that respect to come through in this story. Even in the books and stories I was reading to get a feel for a dirtier galaxy based on the Old West, the characters treated their guns like the closest partners they’d ever have, which was probably pretty close to the case in those wilder frontier times.

Stories are not soapboxes, though, and it can be difficult for a writer to separate their personal views from those presented within their prose. Firefights offer great opportunity for excitement, high action, and conflict. But a quick-trigger topic like gun use (ha ha) requires at least some responsibility on the writer’s part. Like any weapon, they’re dangerous, and our stories would lose a measure of realism without addressing just how dangerous they can be. We can do this through the actions, reactions, thoughts, and dialogue of our characters, as well as offering realistic depictions of what happens when those characters use their firearms without awareness, caution, or respect.

Have you ever written a gunslinger? What do you think about guns – or any weapons – in stories? While realism is important, how much do you think a story requires to be seen as effective in its telling?