“Worth Dying For” [Pacific Rim] 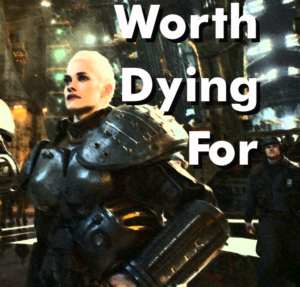 After the sealing of the Breach and the ensuing celebrations, the crews continued to work. Not to advance the cause of the Jaeger program, but to mourn and honor their dead.

The salvage crews returned to the Shatterdome what they’d managed to find of Cherno. Of Typhoon, too, though the crimson debris didn’t interest Ein so much as the burnt and twisted ochre metal.

The left leg was nearly intact. The right hand, as well. No sign of the torso, though. Or the head. Destroyed in the battle with Otachi and Leatherback, they said. The details didn’t matter. The Jaegers were gone. Their pilots were gone.

In the week since that terrible night, he’d had time to come to grips with that fact, though it didn’t make her loss any easier to swallow. He’d never again hear the steady tread of her boots as she walked toward her Jaeger, never again smell the clean scent of her sweat as she stepped from her Conn-Pod, never again see the quirk of her red lips as she’d train to the technical beat of her Ukrainian electronica.

The rest of Cherno’s J-Tech crew hated that music, but no one ever said a disparaging word about it within Sasha’s earshot. Ein liked it, though. Sort of. That Sasha enjoyed it was enough. He’d even asked her for a sampling, to which she’d smiled – smiled! – and promised him a datapin of her favorite tracks.

He’d fallen in love with her the moment she’d smiled at him. And just standing in the shadow of Cherno Alpha, under the gaze of such a woman, had been his reason to work, and strive, and fight.

Now, the weight of her sacrifice made Ein crumple on his bunk, that same datapin full of music files clutched in his hand.

The door clanked and belched with a pressure change, but he didn’t look up, instead groaning, “Not now, Albert.”

His brother had been trying for days to coax him from his self-imposed hell, with ploys and promises more fitting the privileged, selfish boys they’d been growing up in Ulm than the men they’d become: drunken challenges along Hong Kong’s stretch of dingy dives, scavenger hunts for the K-Science teams in the seedy black market maze, even amorous adventures in the city’s red light district. It was stupid. Pointless. And it dishonored the memory of his lost Valkyrie.

But, it wasn’t Albert who’d made the door shudder open, or who called his name in a tentative, curious murmur:

That high, feminine voice made his thoughts stutter. It also made him raise his head, mumbling, “Una?”

“I came to see if you were all right,” she said, floating toward his bunk with her soundless step. She settled beside him, barely disturbing the blanket or mattress.

“I’m fine.” He returned his gaze to the floor, noticing that her toes only just touched the grates beneath his boots. The sight made him smile a moment, for some reason.

“You’re not,” she said pointedly. Her hand touched his back, between his shoulders.

She’d touched him like that once before, the night Cherno hadn’t come back. He hadn’t noticed then how the light, kind press of her fingers started a faint warmth fluttering through him. This time, though, he closed his eyes, to feel it spread and multiply, and fill him with a new feeling not so lonely.

He sighed a long, low breath. “You know me a bit too well,” he said, half-lamenting but half-amused, as he looked at her again.

Una returned his faint smile. “We’ve worked together for three years.” She blinked her brown, doe-like eyes, and her smile wilted. “But, in that whole time, I’ve never been afraid for you. Until now.”

Ein pulled the air between them through his teeth. “Don’t,” he said, his vision going narrow with a frown. “I don’t want you fearing for me.” He reached out, laying his hand very tenderly upon her jaw. It wasn’t the defined and noble edge of which he’d often dreamed, but rather slender and gently sloping. Delicate, even. He stroked it with his fingers.

She didn’t react, save for a slow, sad smile. “You say that like it’s possible. Like I can just close my eyes,” she said, and did, her lashes lowering with a weight he could nearly feel in his chest. “And forget I care.”

The air shifted, and his heart stuttered, making his throat ache with a sudden dry tension. He considered – only for a second – taking his hand from her face. But it wouldn’t move.

“I care for you, Ein,” she went on, as though she hadn’t heard his quiet warning. “I care for you more than anything. I know I’ll never be like Pi Kaidanovskaya. Not to you.” She shook her head, adding, “But I cannot silence what is in my heart.” Her narrow shoulders drooped with the burden of resignation. “I wouldn’t want to.”

Ein froze. He’d muttered nearly those exact same words, himself, about Sasha. When he’d said them to Albert, his brother had groaned and cursed and told him to get over his potentially damaging schoolboy crush. But, here, Ein swallowed, hard. Because it shouldn’t have been like this. He should have noticed. He should have paid attention at some point over these last three years to the brave and kind and clever little single mechanic beside him, rather than pined in hopeless solitude for the powerful, untouchable, married warrior pilot who’d known him only as a member of her Jaeger crew and not as peer or friend or—

“Liebling,” he whispered, without even thinking the word.

Una flicked her gaze up, clear but cautious.

Ein nodded, slowly. And, slowly, he smiled again. He was still holding her cheek.

She mirrored him, stroking her small hand over his prominent brow. “Darling,” she echoed, and leaned over to kiss him, only a touch of her soft and gentle lips to his, but it filled him with such fresh fire, he felt nearly consumed.

He pulled back before letting such flames fan themselves, their lips clutching only quietly, to murmur, “I’m sorry.”

She pulled away, too, curiously. “Why?”

“I never opened my eyes,” he said, drifting his gaze over the smooth lines of her face as it lit with another smile.

“I never opened my mouth,” she allowed, and chuckled, a high, warm, welcoming sound. She quickly turned silent, though, moving her whole body against his, this time, in preparation for a new kiss.

He backed away again, one hand laid upon her shoulder. It almost broke him to say so, but, with trembling tongue, he managed it: “Shouldn’t we wait? Go slowly?” He looked at her and cracked an uneven smile. “I don’t even know what music you like—”

“Chopin,” she said readily. An impish gleam shone in her eyes. “And The Pogues.”

He chuckled. “Or, your favorite food—”

“Goulash. But, only my babička’s recipe.”

His chuckling turned to laughter. “Or, oh, I don’t know…!”

She laughed, too, that most splendid of sounds he’d heard before but never so clearly as now.

“You don’t have to,” she said with a subtle shake of her head. “We’ll talk, and take our time, and get to know each other properly.” The gleam returned, brighter than before, as she brought her legs beneath her to kneel on the bunk beside him, cupping his face with both her hands. “But first,” she said, shifting one knee expertly over his lap so they sat chest-to-chest. “This.” And she kissed him again.

He knew he’d always remember Sasha Kaidonovsky, and feel a weight in his heart whenever he thought of her cool, commanding presence. He would always honor the memory of who she’d been, and what she’d done, and the countless lives she’d saved at the helm of her towering Jaeger, by the side of her husband. But this other woman, whose look and touch and kiss were meant specifically for him… This was a woman worth living for.