Whom do you love the most? [Fearless: Chapter 17, Excerpt; DRAFT]

Here’s an example of a longish excerpt that I could probably remove…except I like too much what it says about the crew, and it gives a neat little point for Amber at the end:

Venus gave Emma a bounce in her lap and bent her chin to the girl’s shoulder. “Emma. Who’s the best surfer in the crew?”

Emma’s face split into a wide smile, and she clapped her hands on her thighs. “Neville!”

The crew laughed, save for Scott, who shot his daughter an incredulous look.

“See?” Neville told Scott with a wag of his finger. “That is why I am your captain. Even a four-year-old recognises my superiority.”

Venus snickered, then leaned in to Emma again. “And who is the sweetest?” she asked, glancing at the expectant faces around her.

“Danny,” Emma answered with a smile, and here the crew gave a collective teasing croon, while Danny blushed beneath this praise.

Venus twitched her nose and gave Emma another bounce. “And who is the cutest?” she asked in a mock-whisper.

Emma squeaked, burying her face against Venus’s arm. She mumbled something into her mother’s sleeve, which prompted a repeat asking.

“You can say it,” Venus told her, poking her in the belly.

Emma raised her head, her round cheeks redder than even Danny’s had been, and said, “Finchy!”

The crew turned their hooting to Ross, who thanked Emma with a pat on her head.

“I call foul,” Scott said, sounding miffed, while the other guys continued to laugh.

Amid this jaunty mockery, Amber rubbed her hand over Ross’s arm. But then she leaned out and looked at Emma, and asked, “But, whom do you love the most?”

Around her, the rest of them fell hushed. Save for Emma, who didn’t pause to think, but instead said, quite readily, “Daddy!”

“Oh, that’s my girl,” Scott said with a coo, and he pulled Emma from Venus’s lap into his own, which the little girl accepted gladly.

Amber – like a lot of my protagonists – has father issues. Which is weird, to me, since I have always enjoyed a good relationship with my own father. With my mother, too. I grew up a pretty happy kid, even if we never “had” a lot. I always felt my parents were people I could trust.

But I also crave their approval. And perhaps that’s from where these character issues come. 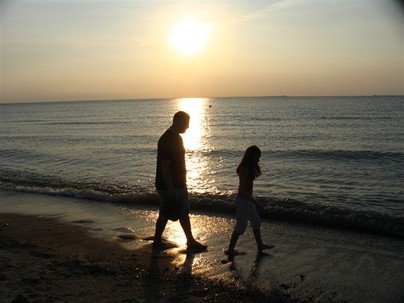 Daddies and daughters. They’re always the same, deep down.

In one early episode of the science fiction comedy series “Red Dwarf,” the character of Rimmer receives word that his father has died. Another character, Lister, asks him if he loved his father. Rimmer replies that he despised his father…but he still desired his father’s approval. Maybe that’s what plagues my characters. No matter what difficulties they have with their families and loved ones, they still seek that praise we all want, as children.

Amber may say she hates her father…but I think that line’s important for her to voice.

How do you write family in your stories?