From Japan to the Yucatan

Okay, so I didn’t actually go to the Yucatan. But, I did go to Japan recently!

The last time I’d been to Japan was back in 2012. I’d gone with my family and my parents. We wanted to do that again, but my dad passed away earlier this year. Both my mom and I decided it would be a nice way to honor my dad’s memory by making the trip he would have done. And, when you lose someone close to you in your life, you realize that the joys of life shouldn’t be put off. So, off to Japan we went!

I’ve been to Tokyo, but I went to university in New York City and I’ve traveled extensively across the country, and I’ve learned that every big city is pretty much like any other. I much prefer my mom’s quieter hometown of Kyoto.

Kyoto is the old capital of Japan. It was spared bombing during World War II, so there are many castles, shrines, temples, and other historical buildings that were eft intact through the last several centuries. The Japanese people are very aware of their history, and one will, on any given day, find many national tourists flocking to those castles, shrines, and temples. Of course, that doesn’t mean Kyoto is stuck in the past. There are many parts of it that are very modern. 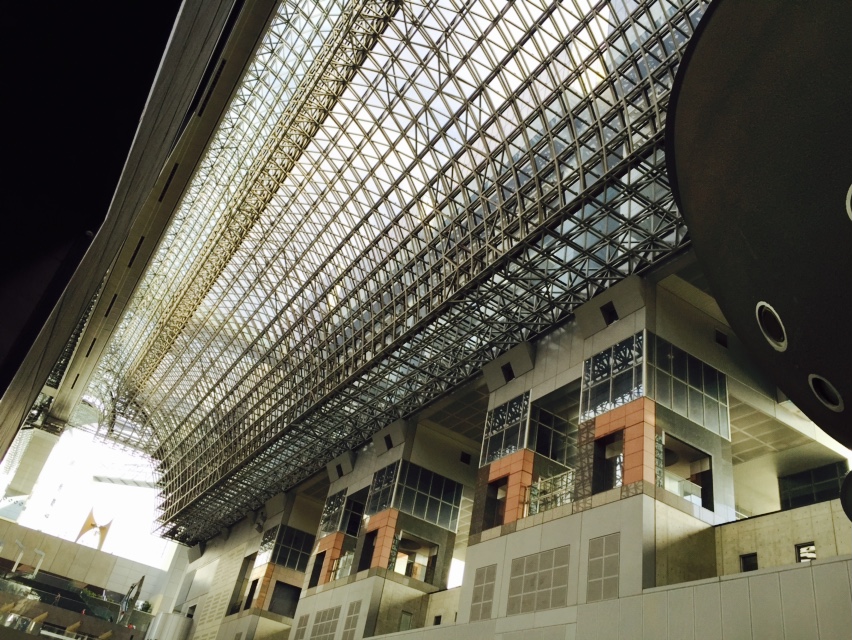 Modernity in Kyoto (the roof of Kyoto Station) 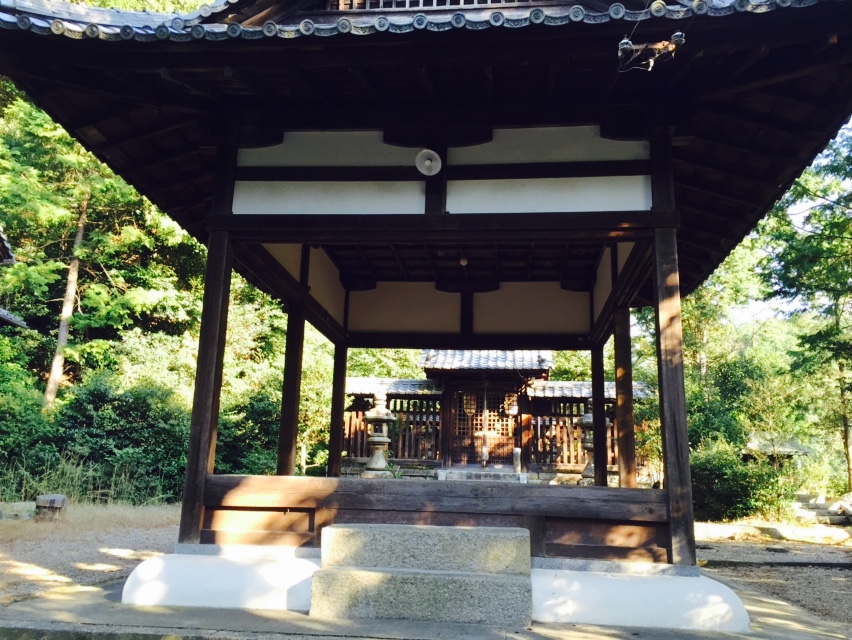 Shrine up the street from our house

As opposed to this quiet little shrine, which was located up the street from our house in Ōtani, just one stone stairway off of a fairly major thoroughfare. The village of Ōtani is located Yamashina ward, essentially a suburb of Kyoto. There isn’t much to do in Ōtani proper, but that’s okay, because it’s always nice to get back to a quiet home base. Plus, we had this view outside our balcony:

For any kind of bustling action, we went first into Yamashina proper, only three stops away on the Keihan Keishin train line. One of the very first nights we were there, in fact, Yamashina had its festival of lights and street vendor fair! You can’t see it very well, but there were lots of people there, from all over Kyoto and the surrounding wards, sampling huge cooked kaki (oysters), takoyaki (fried octopus balls – that’s octopus, vegetables, and eggs fried into little balls, not octopus scrotum), okonomiyaki (vegetable or pork pancake), kara age (fried chicken), “bifu-and-chizu” (beef and cheese), sake, and beer. (Just so you know, drinking alcohol on the street is generally not allowed. Especially not at those prices! This was a special occasion.) Most options were under 300 yen, too, which made for a very nice opportunity to try something different. 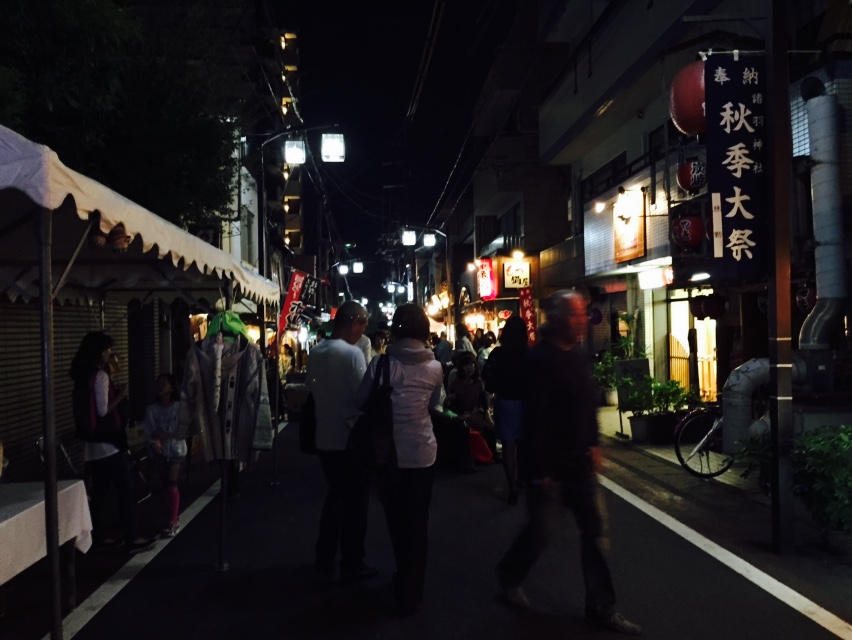 Actually a restaurant oyster. But they were this big even at the street fair.

Yamashina is also home to the pancake house (okonomiyaki house?) where we stop for our first night every time we arrive. I don’t know whether their taps are phenomenal or we’re always so relieved to be in Japan after that 11-hour flight, but the Yebisu beer there always tastes like the best beer ever!

One of the best things about Japan is their ultra-reliable public transportation systems. The trains run like clockwork over there. They have to, with billions of passengers using them every single day! Since we were living out in the suburbs, we had an 8-minute walk to our local train stop, where we took the train to Yamashina, or Kyoto Shiyakushomae, or any number of locations. Yeah. We rode a lot of trains. More often than not, as a way to get something to eat. 🙂 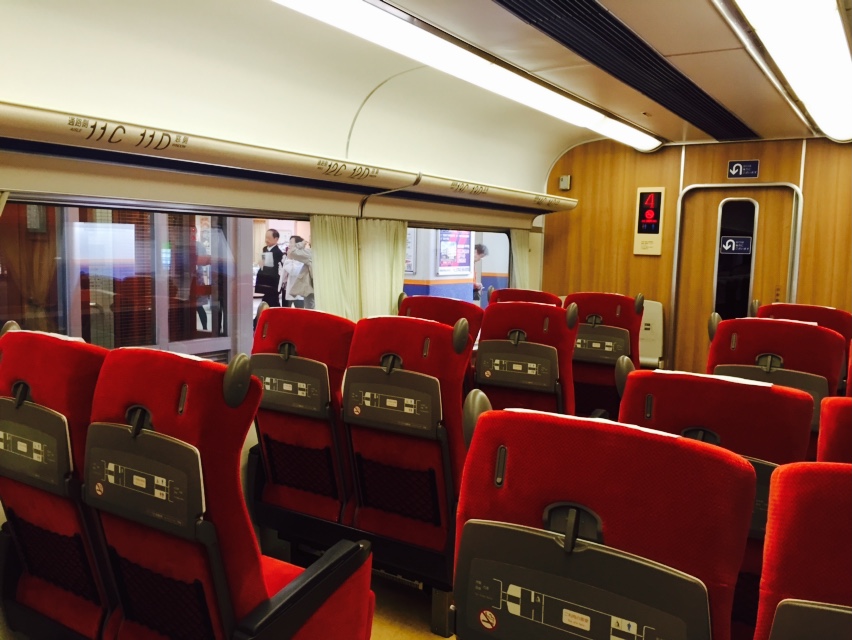 The Kintetsu Limited, one of the more luxurious train lines in Japan.

We eat a lot when we’re in Japan. Every stop, eating. Always something different, always something scrumptious. I’m going to be posting a lot of food pictures for the next few weeks as I cover our Japan trip, so if you’d rather be spared all the sumptuous details, you may want to look away for a while. (Like I am, as I keep my head down with this year’s NaNoWriMo project.)