I know, I know: I had reserved Saturdays for original fiction posts. Shame on me for breaking my own rule.

I hadn’t planned on doing any of the writing prompts this week, because none of them immediately grabbed me. But, while I was writing a “real” chapter, the scene below came to me. It’s back story, I suppose, of an alternate-universe sort. Or, maybe it really did happen; I can’t decide. At any rate, both Kellie Elmore’s Free Write Friday word bank and Lillie McFerrin’s Five Sentence Fiction prompt (DESOLATE) conspired with my evil little brain to create this. I didn’t keep things to five sentences, so I can’t submit to Lillie’s link list, but I wanted to give her some credit for getting the juices flowing.

Warning: Sensitive situations included below. Nothing graphic, but I’d suggest not clicking if you’re uncomfortable with descriptions of sexuality.

I’m slowly returning to normal with this blog. Hopefully, you haven’t already left me behind! Though, I guess if you have done, you won’t be reading this, anyway, so the hopes are moot. I’ve got a conference and an awards thing to do over the next two weeks, but, after that, I’m looking to get back in the thick of things.

Did you write from any prompts, this week? Which ones? Feel free to link to them in the comments, because I’d love to check them out!

A few weeks ago, I wrote about a particular Free Write Friday picture prompt (Free Write Fridays from Kellie Elmore). What came from that free write session was about 1600 words of a relationship story, one that flowed so naturally from my fingers, I just couldn’t stop writing it. As I mentioned in that earlier post, what struck me as I wrote those characters was how much of a role their religion played in their dialogue. Their sexuality also featured prominently, which is one of the main reasons why I didn’t post the piece at the time. Because you never know who you might offend.

Generally speaking, offending potential readers is not something I care very much about. It’s my belief an artist should create Art that speaks from the soul, no matter how dark, bright, raunchy, or chaste. Whether the artist can then sell that creation if they so choose is an entirely different debate. But, the Art at its core should be honest. Otherwise, it’s not so much art or even craft, but simply a consumable.

Side note: I’m not saying there’s anything inherently wrong with producing for consumption. Nor am I saying consumables necessarily exclude artistry, or vice versa. I think A Song of Ice and Fire has proven that pretty well. Besides, every one needs to eat, no matter how high-falutin’ their principles.

That said, I recently revisited that piece of free writing because I was curious to look at it with fresh eyes. I wanted to see if it really was as bad as I’d originally thought. Holding a marker, I went over and redacted everything I thought anyone could possibly find offensive in any way. This is what came of that exercise: 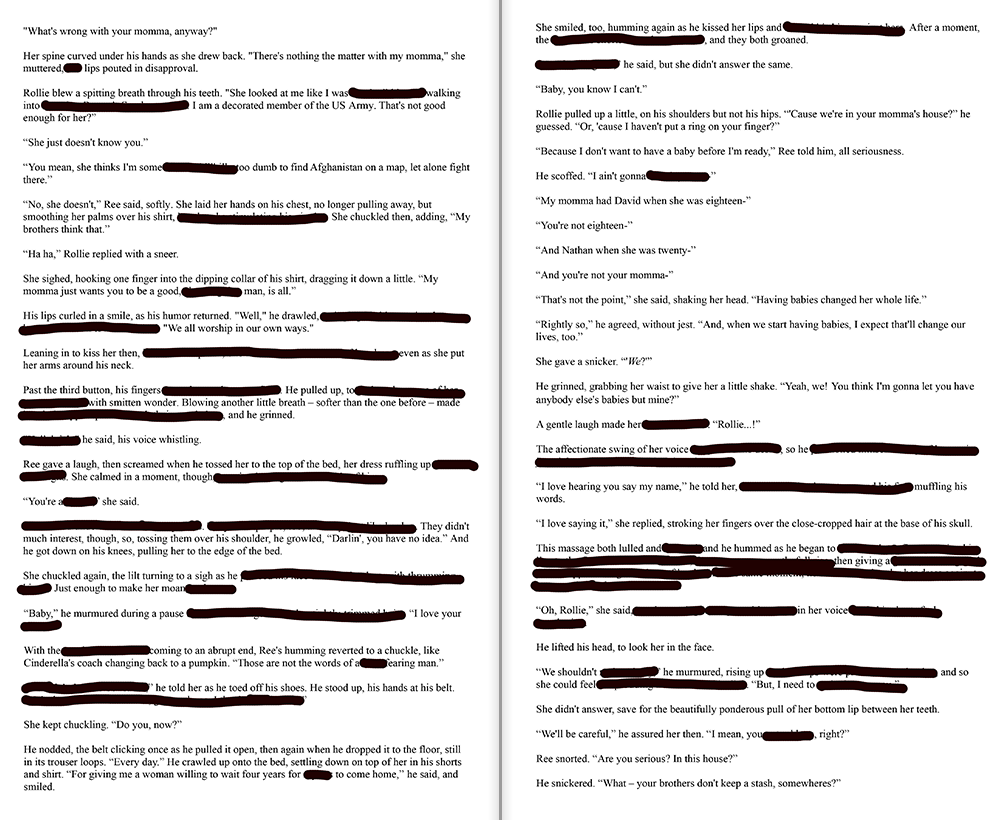 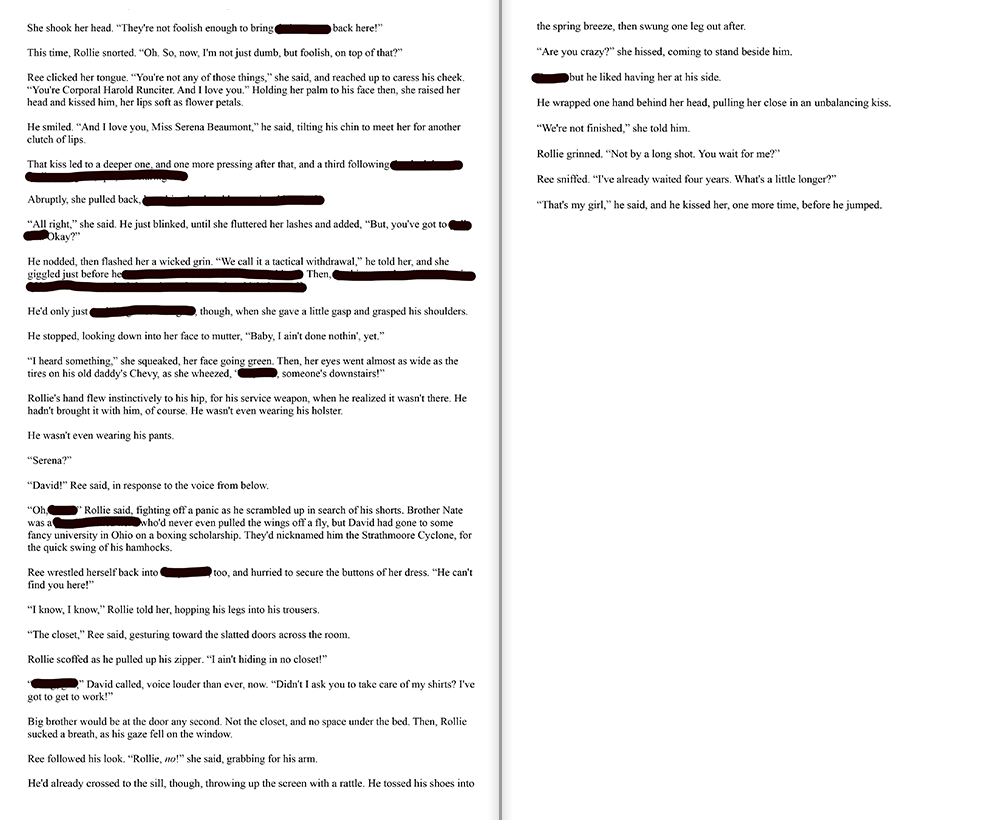 If, for some reason, you’re interested in the actual words, click the images for a more legible experience (they’ll open in a new window or tab). The scene itself isn’t important, though. The reason for this exercise – aside from fueling my own personal amusement – was for me to see just how much black there’d be on those pages.

I’m not particularly smart, so I can’t write good mysteries or thrillers. I’ve only ever held a gun once, and never in a conflict, so I’m not qualified to write a big war epic. But, I understand people, and the everyday conflicts that can arise from personality and heritage clashes. I know love, too, because I experience it in my life every day. And I like sex, because…well, who doesn’t?

I don’t pull many punches when it comes to my stories. I try my best to warn folks ahead of time if a story contains questionable or mature material, but I also believe any individual should be able to decide for themselves if they want to continue or not. But, I’m writing these for me, first, and those topics are the ones I personally enjoy exploring. If they need to be redacted later, to fit someone else’s idea of what’s appropriate or salable, well, that’s life.

Have you ever redacted or edited something you’d written to fit someone else’s sensitivities? Why did you  do it? Or, if you didn’t do it, why not?

The lost art of conversation. [FSF]

This week, Lillie McFerrin’s prompt for her Five Sentence Fiction challenge is “WORDS.”

I went a few different ways with this prompt, at first…though, my initial flash fiction idea – while based on a true story – pushed the vulgarity a bit too much than I like to do for a public challenge. So, this little vignette, taken from the early days of Fearless: By AstroHurricane001 at en.wikipedia [Public domain], via Wikimedia Commons

“The loss of artful conversation”

Stretched upon the sand, beneath a canopy of stars, with the rhythm of the rolling current nearby, the lads often turned reflective.

“I think,” Neville mused softly, “with all this technology, and the culture of instant messaging, mankind’s lost the skill of artful conversation, like the poetry that used to exist in the days of Shakespeare, or Milton: what happened to that, where’s all that gone?”

With his head laid in the pillow of Amber’s lap and soothed by both the sound of waves and the gentle drift of her fingers through his hair, Ross hummed, and murmured, “There might be something to that. But,” he added, his gaze finding Amber’s as he opened his eyes again, “for some things, I don’t think you need conversation.”

That settled the lads for a long minute, until Niall sniffed, and declared:

I’ve spoken on this blog about making art with words before, so I don’t think it needs repeating. I do often wonder, as Neville does, if the immediacy of communication hasn’t taken away some power of words, though. When was the  last time we made efforts to write real letters, rather than emails, or instant messages on a phone?

Or, perhaps, I’m just waxing nostalgic, and that old power of lyricism in dialogue has been replaced by something else. What do you think? How do WORDS speak to you? 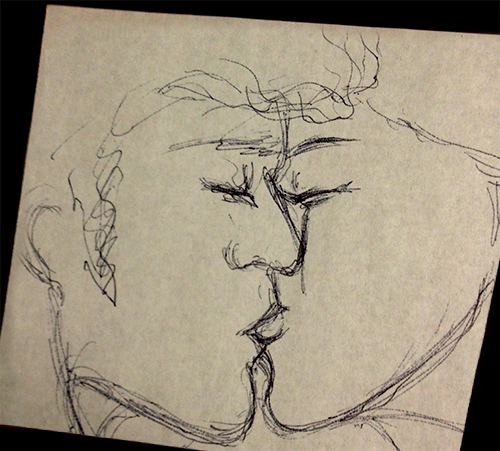 doodling Aral leads to this….

The high-pitched strains of concerto violins singing from the stereo in the corner. The slow-motion flutter of gossamer chiffon to the floor. The muted patter of raindrops against the window, tapping as though to be let in as witnesses to their dance.

He remembered them all, but, more than any other, the words breathed in his ear as she came and took him in her arms for the first time as had and held: “It’s always been you.”

He didn’t totally believe her, but the shine of love when he looked in her eyes could be enough to last him.

I hadn’t planned on participating in any challenges this week, but last week’s free write must have jump-started something in my writing brain, because, after taking one look at Lillie McFerrin’s Five Sentence Fiction prompt this week – “WHISPER” – this vignette came to me almost instantly, with only minuscule changes from the initial drafting.

I hope you, too, are enjoying freedom in your writing, as it’s a glorious feeling to have.

Did you participate in any writing challenges this week? What whisper was blown into your ear? Or, did you whisper something, yourself?