So, as some folks know, I’m writing this sci-fi western story based on a videogame universe. Blah blah blah, I know, it’s fan fiction and not real writing, whatever. I’m still having a blast with it, and just one of the reasons why is it’s given me a new perspective on some old characters.

For those who read “Anywhere but Here,” my 2012 NaNoWriMo project: Remember Tych and Imien? They were the pilot and the cypher, the secondary runaway characters following the two mains in the teenager half of the story. (Don’t worry if that’s confusing. It’s not important for this post.) Anyway, I came to a point in my current story, “From Hell,” where I needed a getaway ship. At first, I’d planned to model the ship’s captain on the character VT from the seventh session (episode) of the anime Cowboy Bebop, “Heavy Metal Queen.” 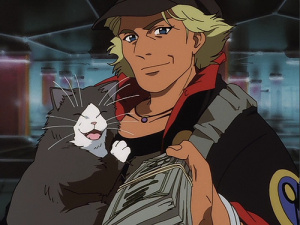 If you’ve any interest in anime, sci-fi bounty hunter stories, or jazz music, check out Bebop. But, again, not important to this post.

In playing around with the different interaction scenarios between the main characters of “From Hell” and the ship’s captain, I realized the ship couldn’t have just one crew member. So, I developed a daughter for Janus (that was going to be the captain’s name). On the story went, but neither Janus nor the daughter character really took hold with me. The daughter, by the way, never even got far enough in my thought process to get a name. That should tell you something about how well that subplot was going.

One afternoon, I was sitting at my writing desk working on designs for the ship. (That went through a few permutations, too.) I stumbled across an old sketch I’d made of the Ridout, the smuggler’s ship from “Anywhere but Here.” Never one to pass up the opportunity to save the world from my terrible vehicle sketches, I considered my work on the new ship done. And, quite suddenly, it hit me.

I already had a smuggler crew, all ready to go, fleshed out and everything. Enter Tych and Imien…or, as I renamed them, Twitch and Ivory. I’d always liked the Tych and Imien characters, but their personal stories never got any deep attention in “Anywhere but Here,” focused as the story had been on the more major plight of four teenagers on the run from the galactic government. Bringing them into “From Hell” offered me a chance to examine their personalities in a more acute light. Plus, their own conflict, such as it is, relates well to that of the main characters…who are also on the run, now that I think about it, but that’s a thought for another time.

Of course, Tych and Imien had to go through some changes to make the jump from one universe to the other, but I couldn’t believe how stupid I’d been not to consider reusing these characters before! I’d borrowed pieces of other characters to create new ones before – I think every writer does that, at least at a subconscious level. For instance, the second principal character in “From Hell” – Hal, Axton’s engineer partner – developed from a mishmash of Amber from Fearless (cultured and sensitive, but also an elitist snob), and the Brock and Captain Aral characters from “Anywhere but Here” (sharp, loyal, a know-it-all techie, but afraid to pull a trigger). In turn, those characters developed from ones to come before them. I could draw up a whole family tree of where my characters come from…but it would probably be as confusing as the Baratheon/Lannister line of heirs!

I had to bring this up because I’m just having so much darn fun writing this story, and I wanted to share some of my excitement. I’ll go back to more serious stuff next time. Maybe.

Do you recycle characters?