One Word to Rule Them…er, Me

In a recent “Media Strategy Saturday” post over at The Red Pen of Doom, Mr. Guy (whose work you should be reading if you are in the creative business at all…and even if you’re not, it’s funny and insightful stuff he’s writing, over there) suggested that everyone play the one-word-to-describe-yourself game. Whether meant facetiously or not, I took it to heart.

So I thought: How would I describe myself, in one word, as an artist/writer/creator?

I reflected on this question for a while, and even bounced some ideas off of my husband. (His suggestions? “Unappreciated” and “misunderstood.” “Tight-ass” was in there, somewhere, too, but I argued that was technically two words, if taken the way I preferred, with all of those early morning workout sessions.)

The issue I started to have was that most of the words I came up with had pretty bad connotations. “Exacting,” for example, creates a picture of a rigid nun…and not the bad-ass, gun-toting kind like Ghost Rider got to pal around with. (I know from whence I speak on this topic, by the way. Sixteen years of Catholic schooling will do that to a person.) 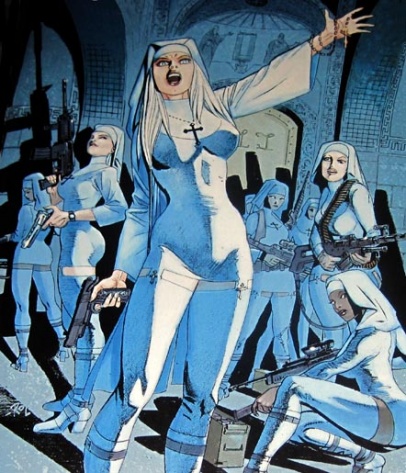 Other words that came to mind were equally problematic: “Creative” feels too generic, and it doesn’t properly convey my approach to wordsmithing and research. “Observant” might be accurate, but it says nothing about my skills as a writer. And “indelible” just makes me sound like a pompous jackass.

But there was one word – my first choice, funnily enough – that kept coming back to me: Diligent.

It’s not a bad word, certainly. Not as exciting or engaging as I would like it to be, as a word for people to think of when they remember me. But not bad, as the squirrels can attest. 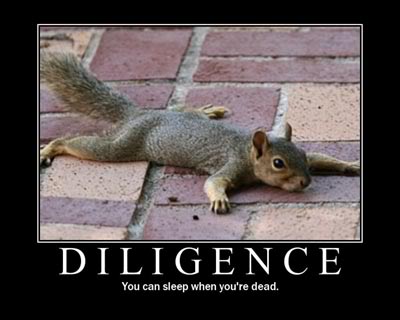 I may not be the brightest star in the sky, or the swiftest wave on the beach. But I always see a project through to its end. And while my writing may never catch on (or catch up) to the masses, I love making stories, and I’ll never give up. Not ’til I’m dead, anyway. And then, I suppose all of this self-interested stuff won’t really matter.

So! What’s your one word?