In my freshman year at university, I loved a boy. He wasn’t particularly handsome, suave, or heroic. But, he had a rolling laugh, and bright, clear eyes, and a smile that would jump eagerly to his face, even for things I had said. And, I wasn’t handsome, suave, or heroic, either. He was ahead of me by a year, but we shared some classes. That meant sharing walks to lectures, study sessions, and dinners, sometimes, to discuss assignments and theories. We worked together, too, in the theater: he drew designs and schematics while I plugged and played, tilting lights and dragging cables up ladders. I came to long for the hours spent in the rafters above the stage, when he’d lean his head close, to peer down my sight-line to teach me about focus and shadows. I still remember those lessons.

Near the end of that first semester, on a night crisp with a chill, we walked back to the dorms from the theater building. He told me about the pretty, stylish senior girl who got all the accolades but who never seemed to notice him, and I told him…something to make him happy:

“Maybe she’s just shy around you.”

He laughed a wobbly laugh that showed off his smile, but it had no happiness. “Yeah, maybe.”

We got to my dorm then, and he opened his arms. To this day, I swear I fell into them. In a story, we might have kissed and found each other. In reality, awkward teenagers that we were, we stepped away, said good night, and that was all.

I thought about him a lot over the next several weeks, through winter break and the return to campus the following semester. By that time, shooting stars shone in the background whenever he smiled at me, or whenever we shared a talk or stroll. I was sinking and had no clue what to do, until another friend of mine – who also happened to be a friend of his – told me:

My friend shook his head. “Write him a story,” he said. So, I did. That’s what you see below, unedited and unaltered from my melodramatic eighteen-year-old self. 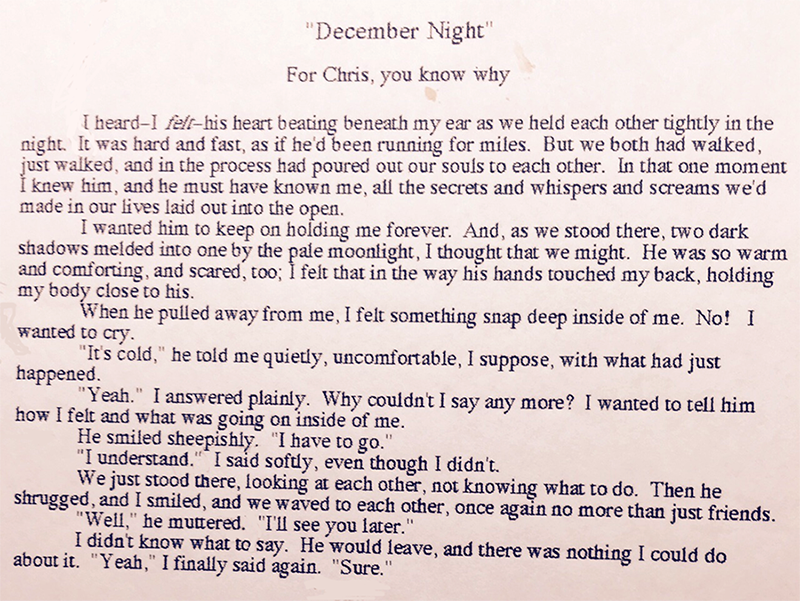 This was the very first story I’d written from my heart that I showed to anybody. I included with it a note, asking him to meet me. He came to my room, but there were people hanging out there, so we went to the stairwell, a quiet, neutral place where we could talk. Which we did, though not about anything important: theatre schedule, a class paper, some acquaintance on the fringe. Eventually, I couldn’t take it anymore, and I asked him:

“Do you really not know why I wanted to talk?”

He looked at his shoes, then looked at me, and said, “No. I know.” He didn’t laugh or smile. Instead, his face seemed serious, sad, and my heart sank. “I’m really flattered,” he began, and the next few sentences I can’t recall and barely heard anyway, for the loud, scratchy swallow of my pride in my ears. Somewhere in his gently compassionate monologue, he told me how, a year earlier, he’d stood where I was and listened to this same speech from somebody else. And, that, somewhen down the line, I’d probably give this speech to somebody, too. I never did, but I have always remembered how he stood up at the end and asked, “Are we okay?”

“Yeah,” I said, because I couldn’t say no, not even then. Not even now.

He smiled, and started down the steps. But he paused past the curve of the landing, turning to look up at me again to say, “Please, don’t be sad.”

It was, at the same time, both the sweetest and the most heartbreaking rejection I have ever been lucky enough to receive in my entire life. No slip of paper from any editor, publisher, or reader will ever fill me with such pain – or such strange grace – as that moment.

I don’t know why I’ve shared this story, now. Except maybe to say, wherever you are, Chris, thank you for that moment. I wouldn’t be the writer I am without you.