It’s November, and some of you out there are writing fiendishly for National Novel Writing Month. Despite my earlier expressed excitement, I decided at the last minute that I should instead concentrate on some works in progress rather than on a completely (well, mostly completely) new story. Rob and Paige’s story isn’t going in the bin; I’m just holding off on them a bit longer. They deserve a fuller telling, anyway. 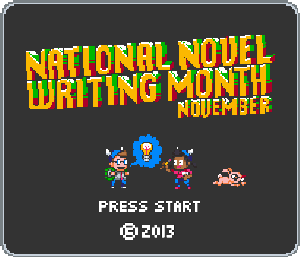 NaNoWriMo is a celebration of writing, deadlines, creativity, and support, all important aspects of becoming a storyteller. Even though I won’t be running the race, this year, I don’t consider that a failure. In fact, NaNo has given me at least five stories of which I’m pretty proud:

2012’s NaNo – “Anywhere but Here” – is a dystopian science fiction story, about four runaways and the Hounds tracking them down. In my delusion, I thought I could possibly push that one to publishable status, so I sent the first 1000 words to editor Kate Johnston. Kate had some great comments…but I was too shamed to send her the rest for a real job; I wanted to make the draft the best I could make it, and I knew that first pass wasn’t good enough. So, I’m working on that in bits and bobs.
On a side note, I believe Kate is still offering a great deal on a free critique of 1000 words, over at Musefly Writing Studio. Check out the link for more details!

2011’s NaNo – Fearless – is still in progress, around 160K in first draft form. (I know: edit, edit, edit.) It’s a romance drama, one I’d once hoped to publish some day. As the story has become longer and more convoluted, though, that possibility has become ever more doubtful. I don’t mind. Once it’s done, I will print it up, bind it, and put it on my shelf. Because the story is so much a part of me, now. I’ve learned the most through writing it, and the depths of its beauty, sadness, and humanity I don’t think I’ll ever approach again.

2007’s story was Sixes and Sevens, romance from an interracial angle, set circa 1997. Why that year? I remember being at a sleepover and waking up to news of Diana Spencer’s death, and talking with my friends about it, how we take the most important parts of life for granted. That, and the music from 1997 was pretty rockin’. 😀

In 2006, I wrote “The Daughters of Krull,” based on the high fantasy film from the 1980s (don’t judge me). While a fantasy, the main plot dealt mostly with fathers and daughters. I took three supporting characters from the film – a middle-aged man, a younger man in his physical prime, and a boy – and used them to examine their relationships with the women in their lives. It was actually a lot of fun to write, if not terribly popular with my usual readers.

And, all the way back in 2005, for my first NaNo, I wrote “Through Green Eyes,” a coming-of-age story of four siblings in colonial Japan, seen through the eyes of the family cat. This is probably the roughest and simplest of my NaNo ventures, but it’s also one of my favorites. It rekindled a love of my personal heritage I hadn’t felt in a long time. And, writing a cat was fun.

Whether you’re participating in NaNoWriMo or not, take a moment to reflect on some of the stories you’ve written over the years. What are your favorites? Feel free to leave a link with your comment, too: because NaNo is just as much about sharing and inspiration as anything else. Tally ho!