Before NaNoWriMo hit me over the head with its massive mallet, I was nominated for the Booker Award, by the lovely itsjennythewren. (Sorry it’s taken me so long to acknowledge!) 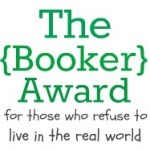 That description fits me well! 😀

For the Booker Award, I’m to list my top five favorite books, and nominate five other bloggers.

I don’t like nominating other bloggers, because there are so many talented writers I follow out there, and I always feel bad when I’ve missed someone. So, rather than make nominations, take a stroll through the Friends of my blog or the list of bloggers I follow, and give their sites a read. And, feel free to join the ranks of the Booker Award winners by taking the image above!

Now, for my favorite books….

This list fluctuates a lot from year to year, based on what I’m reading (and what world I’m embroiled in). But, here are some of my perennial favorites (links lead to the Wikipedia pages, which do contain spoilers, so be warned): 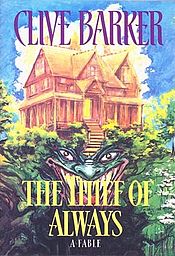 The Thief of Always, by Clive Barker.
A fable of magic, childhood, and the preciousness of time. Written for children, this quick read is also a story for adults, as it recaptures much of what’s fantastic about being a child. There’s danger and wit, even a charmingly chaste love story. And, of course, an unlikely hero who’s every bit magician as he is simple boy. 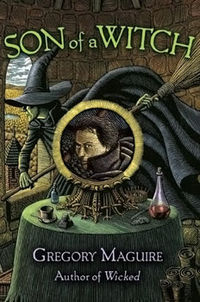 Son of a Witch, by Gregory Maguire.
The sequel to Maguire’s popular retelling of the Oz stories, Wicked. I liked Wicked a lot, but I appreciated the more direct coming-of-age tale central to Son. Full of dragons, intrigue, and romance (of many kinds), Son of a Witch feels more complete, to me. It suffers a bit from being a middle book, but there’s enough about Liir – the main character – to make the world of Oz feel so much more real than it did even in Wicked. 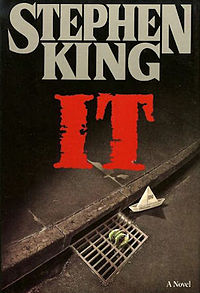 IT, by Stephen King.
There’s something about terror and childhood going hand-in-hand, and King’s IT does so masterfully. Many of us can relate to at least one of the Losers, the children-become-adult protagonists in the book. The main conflict between monster and men (and woman) is terrifying and thrilling…but King’s prose feels strongest when he’s telling the history of the Losers’ lives in rural Maine. I’ve heard the book touted as a great American horror story, but it is, at its core, about characters. And those characters cut, bleed, shine, love, and everything in between. 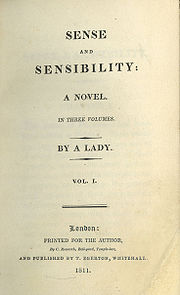 Sense and Sensibility, by Jane Austen.
Like my Sally says, “[That] is one of my favourite stories!” The romantic and dramatic entanglements of the Dashwood sisters are timeless, and their wit and sensitivity are equally biting and tender. Colonel Brandon is one of those great soft-spoken heroes (yes, I call him a hero) you look for in real life. The story is a bit pat for some modern readers, but I’ve always enjoyed its distinctly feminine charms. 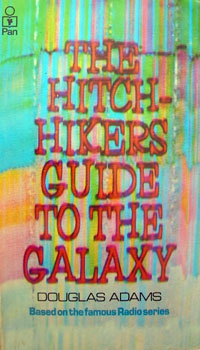 The Hitchhiker’s Guide to the Galaxy, by Douglas Adams.
Really, who can’t identify with common-man shlub Arthur Dent, and the (mis-)adventures he has with Ford Prefect, Zaphod Beeblebrox, and Trillian? While the story didn’t start as a novel, Adams’s sometimes-caustic but always-entertaining humor – both in the story proper and the side-notes for the Guide – is one-of-a-kind, and firmly entrenches this book in my list of favorites. The sequels are darn good, too, but this introductory adventure of mice and questions and the destruction of the Earth is a wonderful romp on so many levels. If you haven’t read the Guide, I don’t know what you’re waiting for.

Additional:
“The Unholy Grail,” by Fritz Leiber.
This one is not a book but a novelette, the first story ever written about the sword-and-sorcery anti-hero, the Gray Mouser. Companion Fafhrd doesn’t even show up in this story except as a single line anecdote, but that doesn’t stop this one from being one of my favorite Fafhrd and Gray Mouser stories, ever, mostly for how visceral Mouse’s hatred is for the villain, and how overflowing his love for the villain’s daughter, Ivrian. Fafhrd and the Mouser are notorious womanizers, but, in this short tale, you really get a sense for who Mouse could have been, if he hadn’t succumbed to the allure of dark magic. Ivrian is a great little character, too: frail at the beginning but with a kind of growing strength the more time she spends with her beloved Mouse. Just a great fantasy read, simple in its telling, and I look to this one whenever I think I’m going overboard with the prose.

Thanks again to itsjennythewren for the nomination! It was a great excuse for me to comb through my bookshelves, again.

What are your favorite stories?