It’s going to be an exciting day.

A few weeks ago, I helped produce the broadcast and webcast of our university’s commencement ceremonies. Our speaker this year was Vice President Joseph Biden, which made for an…interesting production day, to say the least. Just feeling the motorcade approach was rather exciting. Yes, I said “feel” – the rumble of cycle and car motors was like a small earthquake!

I won’t go into Vice President Biden’s speech, which you can listen to yourself, if you’re so inclined. He was very self-effacing and easygoing, though his security was something of a different story.

Usually, we don’t have to deal with magnetometers when we set up at the production control truck. This year, though, we were warned that safety measures would be similar to an airport security queue.

For those of you who have not traveled through an airport recently, they scan everything, from electronic devices like phones and laptops, to the change in your pockets, to your shoes. I fly fairly regularly – three or four roundtrips per year, on average – so I know what these security queues are like. That said, I don’t know why I didn’t check my work backpack before I left the house that morning. Maybe because I had to get up at four a.m. to be at the truck by six, or maybe because I hadn’t had the opportunity to get in my morning workout routine, or maybe because I didn’t have any peanut butter with my toast. Whatever the reason, I slung my pack over my shoulder and headed to the production field, without giving what was in my bag a second thought.

Until I got into that security queue.

The walkthrough metal detector was for people only. Each backpack, handbag, laptop case, and purse had to go through a manual search. And they didn’t just search. They pulled out everything. Now, Mom always told me to be prepared. So, I make certain to keep preparedness supplies in my bag at all times: 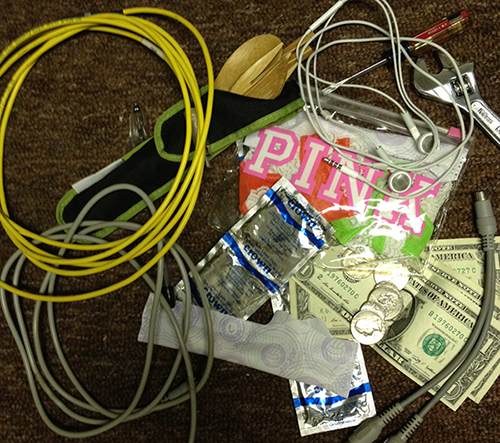 The crap I carry around in my backpack on any given day.

I think it was the string of condoms – or maybe the packet of spare underpants – that made the security guy look at me a little funny. What else could I say, but, “It’s going to be an exciting day.” I suppose I should consider myself lucky he just snickered, put everything back in my pack, and let me on my way.

This has nothing to do with writing. Except, perhaps, to say, always be prepared, for whatever might come at you. And, always be willing to laugh at yourself a little.