All heroes must remain fearless, yes? 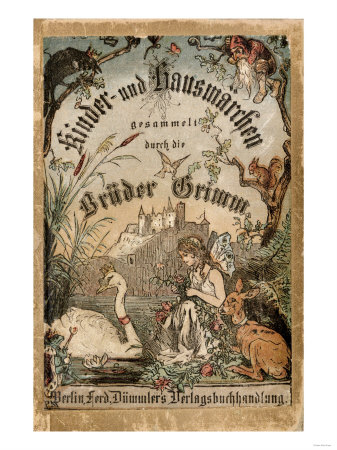 Ross nodded, his eyes lingering on her as she padded into the bathroom. Shortly, he heard the sound of shower curtain rings being pulled along a bar, and then the staccato patter of water, and then he turned his attention to the low bookcase beside the chest of drawers, in an effort to distract himself from the thought of Amber naked and wet no more than a section of hallway away.

A closer perusal of the book titles stacked side to side on the shelves didn’t give him any greater insight into the girl who’d placed them there…until he noticed one book – a tall, thick, weathered hardback – that was more worn and more beaten than any of the others, and significantly so. He wasn’t much surprised to realise that it was a book of faery tales (it wasn’t readily evident what “Märchen” meant, but “Grimm” was easy enough for him to recognise). Pulling it from the shelf, he opened it onto one supporting forearm with a creak of stiff binding.

The stories were written in the original German, which – with the exception of a few very simple words (yes, no, sorry) – he couldn’t read, but many of the crudely-coloured pictures were familiar from the bedtime stories from his youth. He wondered a bit absently why this particular book was so much more tattered than the rest; even the most misshapen paperbacks were in better condition than this old tome. And then, while flipping through the pages from back to front, a very familiar word written in black script on the inside front cover caught his eye, and he paused.

For Amber, my darling princess, the message read, and Ross paused, as he felt a sharp if short twinge of jealousy that made him frown. Was there some other bloke, then, for whom she longed more than any other, and for whom he’d now have to silently compete for her attention and affection, just like he’d done with so many other women over the years?

The inscription went on:

You are a more valuable treasure than any of prince or devil. Be brave, even in the darkest forests. With more love than you know, Your Father.

Sitting there on the bed, with the book laid open across his arm, Ross paused again, feeling abruptly stupid for his jealousy. Because of course such a gift from her father would be so tattered and used. He understood well the quiet desperation of a man- or woman-child trying to hold on to something so cherished lost; he’d spent a long time of his youth trying to be like his own father for that reason, like the good-natured husband and all-knowing dad that James Finch had been. But even the years at Torpoint and keeping a lifeboat rescue pager in his pocket wouldn’t bring back a dead man, any more than Amber’s wear and tear of a precious gift of a storybook would make her own father come home.

Staring at the written words on the inside cover for what seemed like a long time, Ross felt both privileged and despicable to have been given this glance into Amber’s secret innocence.

I guess some folks would consider this a lot of pointless detail into the past personal life of a character, but I enjoy these glimpses. I think that people are just as much products of their pasts as they are of the events that happen to them in the present.