A Little Sliver of Nirvana

“A Little Sliver of Nirvana” 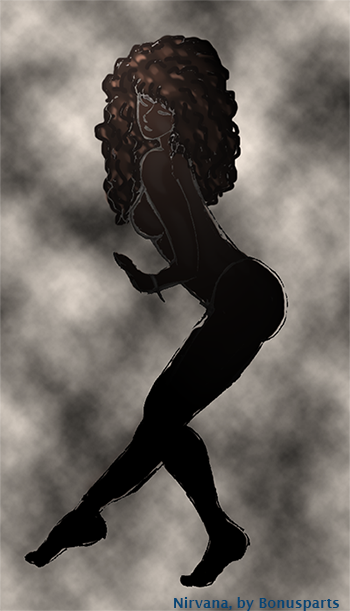 Another 20-minute effort, funkified with Photoshop

Wading through the sea of boozehounds and whores pressing flesh and passing money, an unending rolling tide of vice and greed, he settled in to the corner booth, the one with the well-worn center cushion seat and the uneven grooves in the grain where metal stiletto heels had tread for too many nights. He clicked the control pad beside his seat, prompting the silencing swish of the heavy velvet shroud, and sat back, closing his eyes in the dim dank, to wait.

A flutter of music – high winds with low brass, though more than that he couldn’t tell – made him breathe deep, the scent of soap and lilies filling his nose, erasing the thick stench of sweat and despair. And, looking up, now, he saw her: legs shifting, hips rolling, belly and breasts shining with some invisible light; arms swaying, hair swinging, lips and eyes focused on him, holding him in the trance of her magic-making for as long as they both could stand it, this little sliver of Nirvana.

Slowing at the whisper of the final chords, she frowned, reaching out to him – forbidden, but she’d never cared – to touch his face, when he grabbed her wrist with one hand and slapped the other on the space of table between them, around a treasured bundle of cash, and murmured, “Marry me, now?”

I wrote this entry on my morning commute on Friday, so it’s about 20 minutes’ worth of concentration and typing. I didn’t bother with any editing or refining. I’m not making any apologies for it, either. I’ve decided that, if a prompt doesn’t inspire an idea within 5 minutes, I let it pass. If I do get an idea but I can’t make it materialize properly in 30 minutes, I set it aside in my ever-growing “Random” folder. No offense intended to the folks posting these lovely prompts – or those participating more fully than I’m doing – but I want to concentrate on my larger writing goals. For me, this plan is a nice balance.

Do be sure to visit Lillie’s site for more Five Sentence Fiction submissions, though, and for other flash fiction goodness!

How do you balance between all the stories in your head?