This week’s 100-Word Challenge for Grown-Ups prompt: “…the red box…”

Just like the government, we’re dealing with fiscal budgets at work, right now. So, I veered off from the obvious choice of “the red box” for this week’s prompt, and instead went just a bit to the left:

Eyes twinkling with charmed interest, she pushes him in front of the red box and raises her camera into his face.

“Brilliant,” he mutters at the lens. “Now, we’re tourists.”

She shushes him and clicks. He fidgets, feeling ridiculous as the subject of a photographic cliche.

She lowers the camera with an elfin smile. “Not just yet.”

She pushes him again, trapping him into the antiquated phone box. Then, she presses up and kisses him: soft, warm, sweet.

He’s dizzy when they part.

Closing the red box around them, he grins. “Not just yet.” 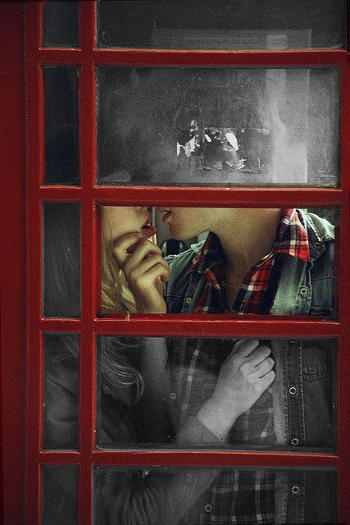 Another little Songbirds Series drabble, because the moment I thought about those red phone boxes, I thought that Sally might take a moment to bother with a snapshot…and Larry would probably scoff about it. But even two people who see the world from such different perspectives can find a way to mutually enjoy something so quaint.