100-Word Challenge: No Way Back

This week is week 51 over at the 100-Word Challenge for Grown-Ups (WCGU). As Julia says:
The prompt this week is another simple one:
…. the line was drawn ….
As always you have an additional 100 words to add to these 4 making 104 in total.

Last week, I dabbled in a bit of heady romance. But, this week, which will come clear through those hundred words, I decided on something different: 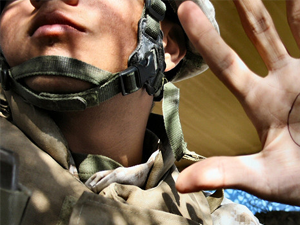 Aral ducked behind the chaise, grimacing as padauk splinters rained down. These were just kids. Children. They didn’t even know what they were shooting…! “It doesn’t have to go down this way-”

“You came after us!”

Aral swore. That crystal alone could have bought these rabbits their freedom…not to mention his and Zera’s birthing permit. “Let’s just talk-”

A spatter of bullets made him duck again.

Aral scowled. They were right: children or no, the line was drawn; no going back, now.

Pulling a breath, Aral primed his rifle. Then, he rushed them.

After talking with another sci-fi writer, I started to think a bit more about my Stowaways characters. I thought the kids on the run needed an adult who could counter their perspective. I don’t like to make straight-out villains, though; I prefer to examine characters in grey rather than black and white. From that discussion came Substantive Aral and his wife, Zera.

There’s more to these characters than what you see here, obviously. But I’d like to know:

What line was drawn for you, for this week’s prompt? And, do these prompts ever make you revisit stories you’d thought abandoned?