Identity, and 100WCGU: “It should have stayed that way” [Fearless]

Though currently embroiled in my NaNoWriMo tale of soldiers and stowaways, I was abruptly struck by Julia’s prompt for this week’s 100-Word Challenge for Grown-Ups:
…the silence was deafening…
WordPress and Twitter friends itsjennythewren and sjbwriting said I should feel free to indulge my pestering inner muse on this one, though, so I’ve done. (Make sure to check out their blogs, too!)

If you don’t like my story, that’s fine. Sometimes, we just have to write for ourselves.

“It should have stayed that way”

The blaring horns, the cawing gulls, even the roar of rolling waves…none of them matched the sounds of Ross’s heartbreak: hitching breaths exploding like dynamite, staccato bursts of emotion spit wet and raw between his teeth.

Yet, still, he was beautiful.

And that beauty pulled, like an undertow, until his sobs became a muffled gasp of surprise from around the briny clasp of his lips.

A heartbeat later, he pulled away, his eyes clear and full. Not of love, though. And even the practised platitudes couldn’t make vanish that look of betrayal.

Wordlessly, he rose, and left. And for Neville, the silence was deafening.

I feel a bit bad that my WordPress readers only get to see this tortured side of poor Neville, when he’s really one of my more well-balanced characters. Love grows in different ways for each of us, though, and this love between him and Ross is integral to the depth of their friendship. 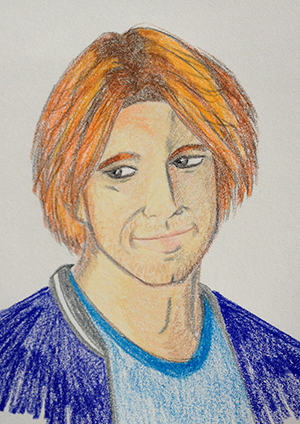 Others might say I’m pandering with my portrayal of Neville, because his sexual orientation gives no conflict to the main plot. But I always felt that, even if there’s no sexual affair between them, his love for Ross made him more honest than virtually any other character in the story. The story (and Ross) needs that. I don’t think I could make Neville straight and have him be the same character or give his perspective equal weight than it has with him being gay…and still a little bit in love with Ross.

How did you answer this week’s prompt? And/Or: What are your feelings about a character’s identity affecting (or not affecting) the plot of a story?