Leave the Line Open; or, The Boys of Stinky Joe’s

This is what happens when I take a nap after brunch and a beer (scrambled eggs and bacon, and a Bear Republic Racer 5, for anyone interested):

Once upon a time, there were three boys – Devon, Kent, and Cleve – who worked the counter at Stinky Joe’s Pizza. (Actually, only two of them were working; the third was just hanging around because he had nothing better to do.)

Would you go to a place called "Stinky Joe's"?

Stinky Joe’s Pizza was never very busy. In fact, it almost never got any business at all. The three boys didn’t know why this was. All they knew was that the lack of business made them very bored. And very, very lonely.

One bright day, the telephone rang, and this made the boys quite excited. They’d never received a telephone call before-!

They fought over the handset for a minute, and then Devon – the bravest, the tallest, and the oldest – ventured, “Hullo…?”

“Hello.” The high, gentle voice on the other end sounded very friendly. And very pretty.

Devon smiled brightly at his mates, each of whom smiled back.

“Is this Older Forty-Four?” the voice went on.

Devon wilted. “Oh,” he said, and the other two boys wilted, too, by association. “No. This is Stinky Joe’s Pizza.”

“Oh,” the girl on the line repeated. She sounded just as disappointed as Devon felt. “I’m sorry. You see, I was looking to make reservations, at Older Forty-Four. I thought this was the number listed.”

“No,” Devon said again. Then he brightened once more. “But- why don’t you come here? We have plenty of food!”

The other two boys – Kent and Cleve – gave a chorus of excited cheers: “Yes, come here!” and “We’d be happy to serve you!”

The girl’s voice hummed. “I’m afraid I can’t, this evening,” she said, and then she gave a little sigh. Even that sounded nice, though, and pretty. Then she drew a breath, and Devon could hear in her voice a smile. “But,” she said, “why don’t you tell me your address, and maybe I can come by some other time?”

Devon grinned. “Yes, yes!” he said, and he snapped his fingers at his mates. “Our address… Our address is… um…!” Oh, no! He couldn’t remember the address!

The other two boys – Kent and Cleve – looked at each other, and then began to scramble around and about the counter, ducking beneath shelves and yanking open drawers, trying to find the address. They bumped into each other in their frantic search, falling to the floor in a tumble.

The girl’s voice hummed again in Devon’s ear. “Listen,” she said. “I really need to go. I have to make those reservations-”

“No, no! Don’t hang up!” Devon told her. What if she never rang again? “I’ve almost got it…!” he said, and he shuffled some papers about, trying to sound busy.

“Why don’t you just read it from the menu?” the girl asked of a sudden, giggling softly beneath her breath. Devon knew that she was likely giggling at him, but even that sounded kind.

He smiled again. The menu. Of course! He grabbed one from beside the telephone – how could he have missed it, there? – and scanned the front of the paper, with its drawing of Stinky Joe, and its orange-on-white lettering. Finally, he found it, and he read it aloud to her, word by word.

“Thanks,” the girl told him when he was done. She giggled again, high and sweet. “You have a pleasant evening, now.”

“You, too,” Devon said, smiling and a-flutter and full of joy. Then he hung up.

“You didn’t get her name!” Cleve echoed.

Devon stared at the phone in his hand, horrified at what he’d done. That girl would never ring back. She sounded too sweet, too smart, too kind, to ring back to someplace called “Stinky Joe’s.”

The telephone beeped as he pressed the button and brought it to his ear again. But there was no dial tone. Instead, there was quiet laughter.

Devon felt something inside of him soar at the sound of the girl’s voice, already familiar to his ears. “Devon,” he said through his grin. “I mean, my name’s Devon. What- What’s yours?”

The girl hummed a third time, charming him. “Tyne,” she said, and that was all he needed to hear.

I honestly can’t say what possessed me, to write down the details of this dream. When I woke up, I found it funny – three rather dim, bumbling stoner kids fumbling over finding the address of the pizza place where they worked, just to keep a girl on the line because they’re bored. But, as I wrote, Devon, Kent, and Cleve (though mostly Devon) became more sympathetic to me. Almost sad. And Tyne became much more playful. 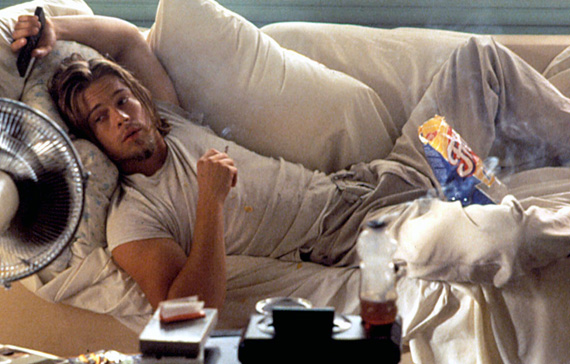 The Dude is my all-time favourite stoner character from film, but Brad Pitt's Floyd, from "True Romance", did come first.

I wrote this down in a rush, mostly just to get it down…though, again, I’m not entirely certain as to why. I guess it just felt nice to write freely and straight from the pen, without worrying over craft or thematic meaning.