I figured I’d better put something up here so folks haven’t think I’ve died or otherwise slipped off the planet. While it may seem – from the non-existence of posts on this blog since the end of 2014 – that I haven’t been doing any writing, I’ve actually been doing a fair share of it, over on my other blog, The Highs, the Lows, and the In-Betweens, my ongoing chronicle of my 2014 NaNoWriMo story universe. Here are the post updates to prove it: 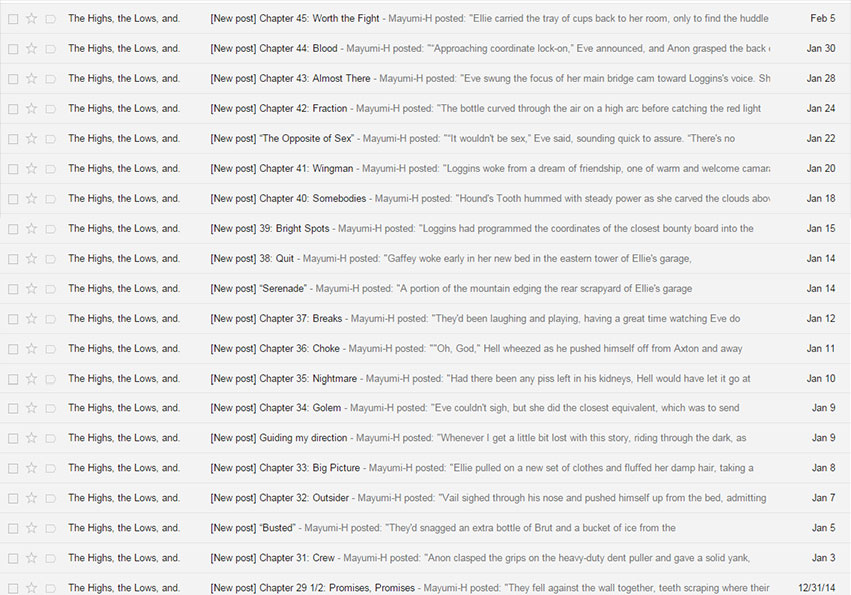 I’m one of those fools who gets anxious when I haven’t updated a particular social media outlet or blog in a while, someone who thinks that makes me less of a writer. But, seventeen story updates for January isn’t too shabby. (One of them doesn’t count, as it’s just a music video link.) It’s not a popular journey in terms of audience size, but I’m having too much fun with this story and these mostly-new characters to care much about that part of it.

Over the course of the last several weeks, I’ve also been working on a massive edit/rewrite of my homo-erotic space western opera story, From Hell: A Love Story. It’s been both interesting and enlightening to see this one evolve from a mishmash of sci-fi and romance ideas designed to cater to a fan fiction audience, to a tighter story of love and acceptance that satisfies my own inner reader. Through this process, I’ve come closer to understanding what my tastes really are, and where my stronger skills lie. I’m sure it will also affect my edits for my waiting-in-the-wings stories, “Finding Mister Wright” and Fearless, both of which I’d like to put through the same wringer starting this year. But, first, I’m working with Scrivener (finally!) to put From Hell: A Love Story together as a real book (courtesy CreateSpace, which awarded two free hardcopies of a book to each NaNo 2014 winner).

Of course, no writer – even a self-proclaimed one – should go too many days without reading something for the fun of it. I continue to enjoy Ross Macdonald’s Lew Archer series of classic detective novels, in the hopes of someday writing my own detective story. But, that’s a post for another day.

Twitter friend Moyabomb asked if I’d share my experiences with my publishing exercise as regards Scrivener, CreateSpace, editing, and artistry, so I’ll have to do a post about that coming up. In the meantime, I hope you are enjoying your own reading and writing journeys!

Yes, even after the craziness that hit statistics caused for my life during my writing of 1 More Chance!, I’m still caught up in the stupid things. It doesn’t even really measure anything, except that someone happens to click into a particular chapter of the story. It doesn’t mean that they read that chapter, or were moved by it, or have anything to say about it (because they’re not leaving me feedback). They could have even just stumbled upon some random link somewhere and clicked through because they were curious or clumsy.

Yet, even though they mean fuck-all, I’m still checking those idiotic click-logs.

I think because I was never very popular, and I’m under the mistaken impression that popularity makes my story better…when I know Goddamn well that many popular stories are really, really terrible and some of them even have mediocre writing (hello, Twilight!), and just because lots of people look at it or leave lots of reviews, it doesn’t necessarily mean that the story is any good. It just means that it’s getting attention, for one reason or another. Maybe because of the title. Maybe because of the summary. Maybe because it’s shouting, “M/M SLASH! YAOI! LEAVE REVEIWS [sic] PLEEZE!” right there on the front page.

And I’ve always said that I would much rather have only one person read my story and genuinely enjoy it and give me thoughtful feedback on it (because that shows that you’ve actually read the damn thing), than a hundred people who just glance through and not really give a shit (or give one of those frankly pointless reviews that say only, “Write more soon!”).

But still here I stand, in the middle of my storm, waiting for someone to say something. And for what? For what, really? I really should just get back to work, and forget about the masses, and do what I’m always telling other people to do: to pull yourself up by your boot straps and hop back up into your saddle and silence every naysayer and just fucking write. Because that’s all I can really do, at the end of the day, no matter what the masses want or demand or whine about.