“FACES” was the prompt for this week’s Five Sentence Fiction challenge, from Lillie McFerrin’s blog. We don’t have to use the word itself, just write five sentences with that word as inspiration.

My original entry was much more based within a fandom, much more referential and trying to be clever. So is this one…though, I prefer it over the original.

For all those parents who think they have any kind of control over what their children do….

Larry’s only criterion was that he wanted a boy; he even had a name in mind: Thor, after the Norse god of thunder, a childhood heroic fantasy figure (though he’d accept Loki, if the personality fit).

Not to say he didn’t love his girls (and, here, he included Sally, even if he’d never call his feisty, gorgeous wife a “girl” to her face) – he loved them more than anything, in fact – but being the only man in a house with three women took its toll; there were only so many evenings he could spend with Elton, shooting 2D zombies, or with Tom, feigning interest in a single man’s problems, or with Craig, faking his way through a conversation of last night’s football match. He wanted to connect with a male who’d understand him, who’d let him be himself; he didn’t think that was too much to ask.

So, when he’d arrived home again after a two-day stint working the dealers’ room at another convention, and his girls had met him at the door with too-wide, cagy grins, asking him to “keep an open mind, don’t get upset, Daddy, please,” he’d known something was amiss, and was ready to give them an earful.

But, then, they’d pulled out that wobbly-legged, round-faced, chocolate-coloured bundle of fluff, that looked up at him with those dark, trusting eyes and that snub, twitching nose, and that happy, proud smile that promised loyalty and interest no matter how mundane, married, or how much of a geek he was…and all he could say around his creeping smile was, “I guess we can call her Sif.” 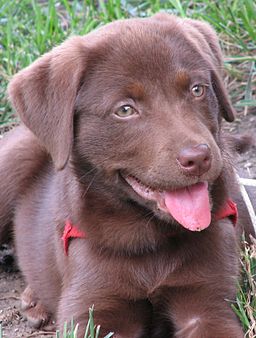 When I think about Larry and Sif, I always think of my own father and our family dog, Muffet. There was some pushback, at first, from our father, at having yet another girl in the house…but, he couldn’t find a more unconditionally loyal and loving companion than that dog.

As much as I enjoy writing for a lot of these prompt challenges…I really have to stop jumping on them so readily, and concentrate on my own work-in-progress novel. I love Ross and Amber too much to let them simply simmer, while I play in other people’s ponds.