Cooking it up with my (head)crew

Sometimes, separating the writer from the character is hard. We find ourselves putting our own traits into those of our protagonist, so they become mirrors of us. They may share the same taste in music, food, or hobbies. Their favorite sports team may be ours; that song on the radio we just can’t stand may make them grind their teeth, too.

One trait that I’ve noticed that comes through in all of my favorite characters is an interest in cooking. Their proficiency levels vary (from Chie’s ignorance about what “simmer” means, to Marshall knowing the recipe for drop scones so well he can make them in his brother’s kitchen without a book), but they always enjoy cooking. It may have different meanings for them – a desire to please, a need to control, sometimes just a way for characters to relax or get to know each other better – but even those meanings are from my own experience.

Even though I’m not actively writing while I do it, cooking allows me the freedom to let my mind wander. It’s a time of day I usually spend alone with my thoughts, and those thoughts almost invariably turn to my stories and characters: Does Paige sneak chopped vegetables from the cutting board while Daniel looks away? Does Ross sway with Amber as she stirs some sauce? Does Axton have to stop making breakfast because the hounds won’t settle down?

No matter who the character is – doctor, dancer, reckless bounty hunter – they’re all me, in a way. I’m no doctor; I’m barely a dancer; I couldn’t track a skip to save my life. But there are more basic traits we share between us, like joy for art, work, and – sure – cooking. In honor of that sense of sharing, I thought I’d share a bit of a recent cooking experience: curried shrimp and mango soup. The photos below detail the real-life steps I took, but rest assured as ingredients were browning, bubbling, and coming together in that Dutch oven, my brain was equally bubbling with ideas for where my next story should go. And, of course, there’ll be cooking.

If you’re interested, here’s the recipe, originally from Eating Well:

What personal traits – if any – do you find you share most commonly with your characters? What do you see your characters doing when you’re cooking, doing the wash, or some other regular chore? Do you think you’ll try the curried shrimp and mango soup recipe? Let me know in the comments!

The wafting aroma of cooking vegetables summoned her from the door to the back kitchen, where she stopped, abruptly.

The dark outline of his form-fitting wetsuit – he seemed to live in the thing – gave the impression of him in silhouette, except for the visible shift of muscle as he traded his balance from one bare foot to the other. It created all sort of fascinating dips and rises, stealing her attention from shoulders to bum to legs…then back to bum again.

“Yummy,” she said, mostly under her breath, but he turned, that familiar roguish smile curling up.

“Want to try some?” he asked, proffering her the steaming contents of the wooden spoon in his hand.

With a delighted cringe of her shoulders, she bounced over, already holding up her hands to catch any spill. “What is it?”

“Fresh vegetable barley soup,” he said with a touch of pride.

She hummed, equally pleased. Crunchy courgette; plump mushrooms; tender, springy barley. And was that bit of saltiness…Worcestershire? “That’s good! Who made it?”

His grin dissolved. “What you mean?” he said, as his deep-set eyes went dark. “I made it!”

“Yes, really. It’s my mum’s recipe.” He straightened up, to look down his nose at her. “What? You think I can’t cook, just because I’m a bloke?”

“No. I don’t think you can cook because you’re a brah,” she said, exaggerating the surfer term of camaraderie with a sneer.

She scoffed. “You’re the one wearing the apron that says, ‘Will Cook for Sex.’ And you’re accusing me?”

He turned round to the stove again, grumbling, “I’ve spent the last hour and a half slaving over a hot range for you, and this is the thanks I get.”

“Oh, I’m sorry,” she cooed, winding her arms about his waist.

“No, no. I’ll go replace the transmission in the car, then grab a few pints with my mates before I kill something for supper on my way home. ‘Cause, apparently, that’s all men are good for, in your world.”

Nestling her nose into the space between his shoulders, she rolled her eyes. “There’s no need to be melodramatic. I said, I was sorry.” She gave him a little squeeze, pressing herself close to him. “Your soup’s quite good. I’d like some.”

He half-turned, looking over his shoulder at her; that smile was back again. “Yeah?”

She nodded, loosing her hold only just to let him shift fully around, so they were chest-to-chest. Then, needling one finger between the Os on the apron, she snickered and said, “So, you’re good at one. What about the other?” 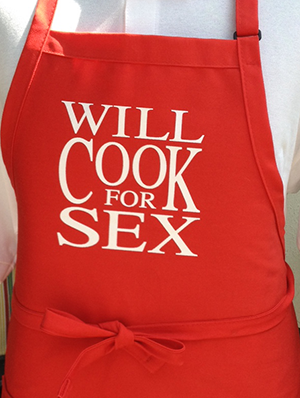 A bit of free writing, to help myself get back into the writing/blogging sphere. And, while this isn’t exactly the right weather for it, a version of the indeed-quite-yummy vegetable barley soup mentioned in the scene above, for those of you looking for something other than my tired old relationship stories:

Ingredients (use fresh whenever possible!):

Mix in 7 cups vegetable broth, mushrooms, zucchini, lentils, barley, tomato paste, and bay leaf. Bring to a boil. Reduce heat and simmer ~1 hour or until lentils and barley are tender, but not mushy.

Blend in remaining broth, Worcestershire sauce, and salt and pepper (if you like). Simmer for another 10 minutes, then remove bay leaf and serve, with parsley or cilantro garnish. (Goes great with warm rustic bread!)

What’s nice about a meal like this is you can be rather free with the ingredient quantities. For example, I like zucchini, so I’ll chop 2 instead of just 1. Same with the barley, which my family loves: I always put in at least an extra 1/4 cup. To stretch this out a bit, there’s also no harm in adding some extra water or broth…or even a bit of leftover brisket!

As for the story scene, I suppose there are some rather serious gender issues proposed therein. But the characters didn’t seem to want to dwell on them, so I didn’t, either.