The Adventures of Tater Tot and Spud

Today’s Saturday, when I’m supposed to post some Original Fiction. But, engrossed in our student film contest, I didn’t get the chance to write anything new for y’all this week. So, I figured I’d go back in time a bit, and share with you a little something from my past.

This is a comics script I wrote around the time I was in college. I’d never written a script before, and I didn’t know what I was doing. But, like anyone just starting out with a new venture, I knew what I liked, and I had a pretty good idea for what I wanted to see. This project never came to fruition beyond my first draft below, but, when I found it the other day, I figured it might be a fun change of pace for this blog.

Take a gander if you’re so inclined. The script is silly and stupid and full of comics in-jokes, and I didn’t bother to retype it from this old printout, for fear I might be tempted to fix all the mistakes. But, it still makes me smile. I think that’s worth something. 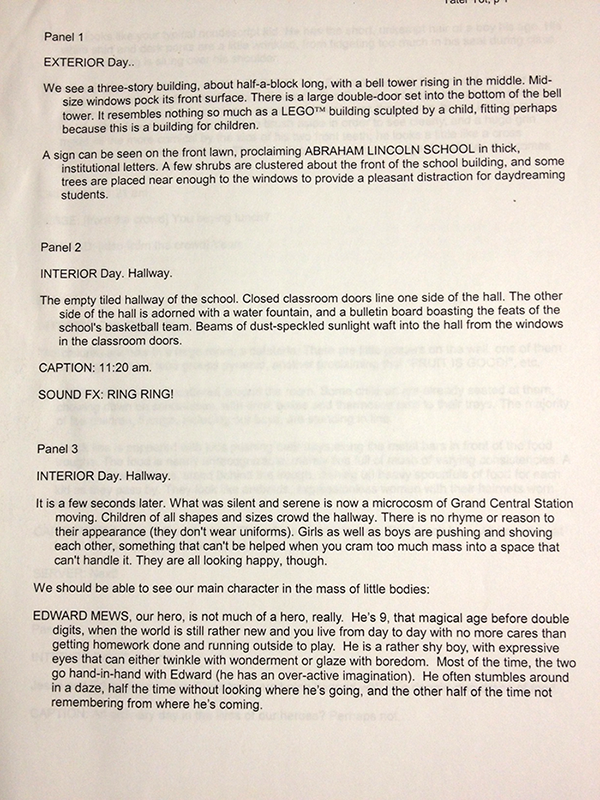 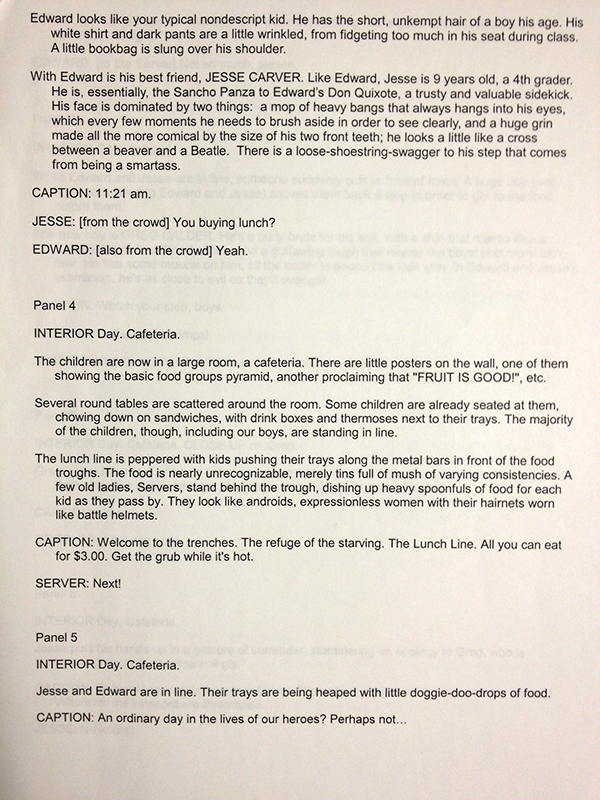 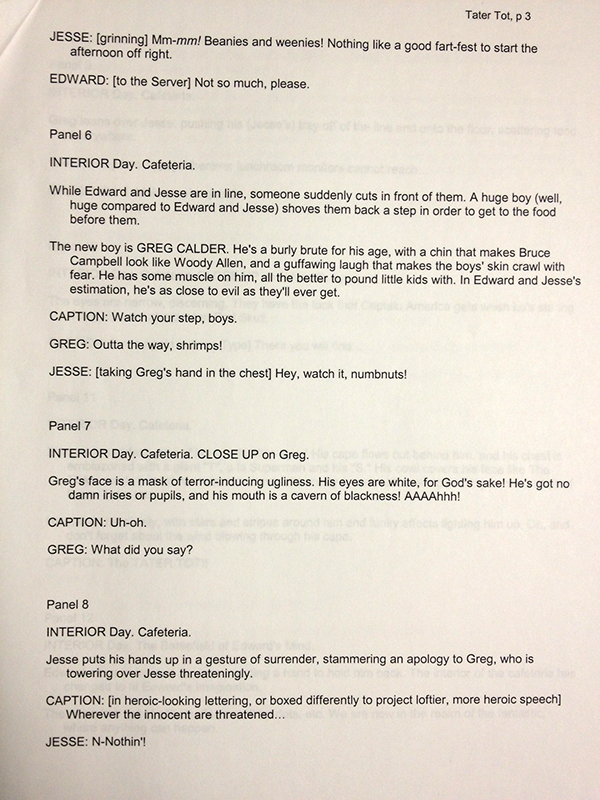 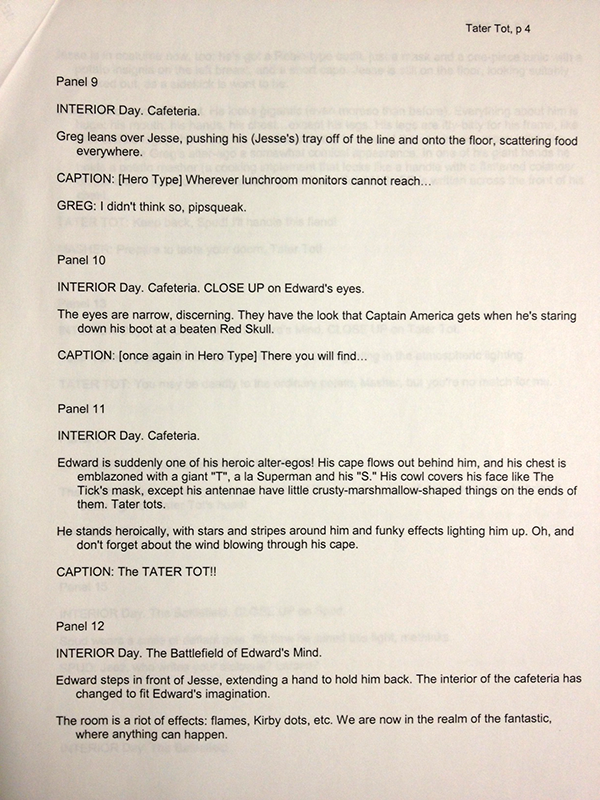 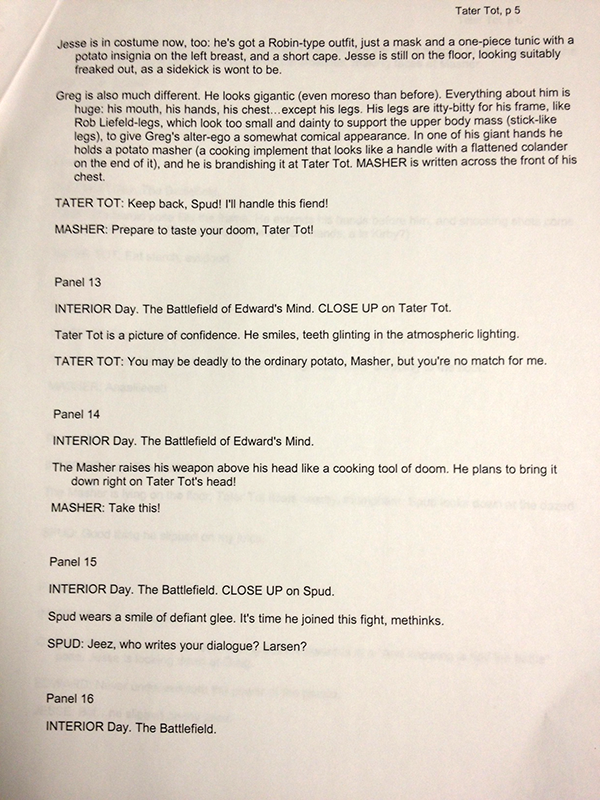 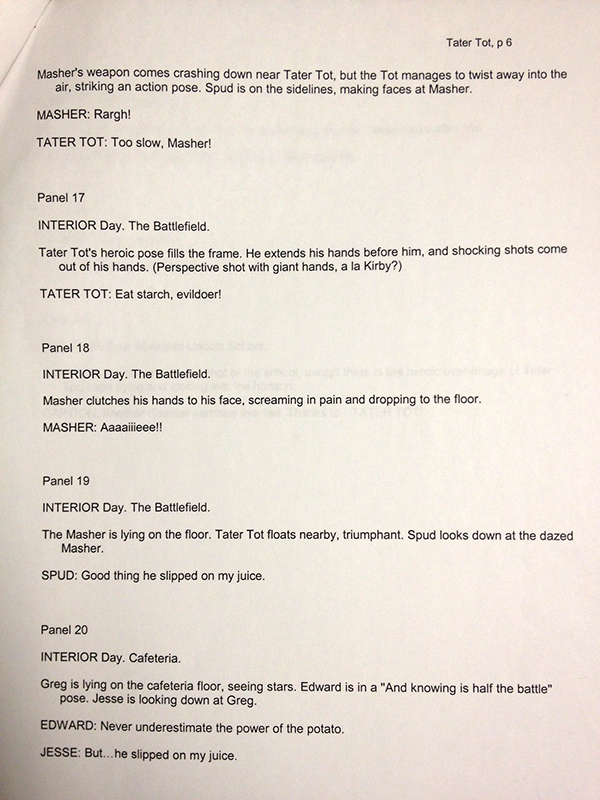 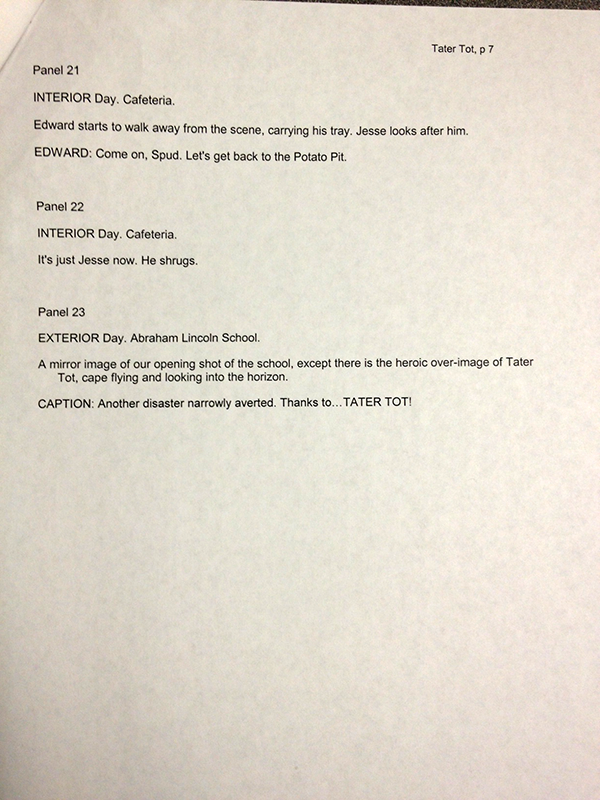 The story/script has a lot of faults. It’s too slow to get started, doesn’t get to the action quickly enough, and it’s clunky overall. But, I think the world could use more heroic Tater Tots – and more imaginative Edwards – no matter how ridiculous and flawed their stories might be.

Do you ever look back through your old stories and writing projects? Do they make you smile, or cringe, or both? (It’s okay if they do both. 😉 )

Be Your own One Person

I think Dave Sim is a bastard. An accomplished bastard, to be certain, but a bastard nevertheless.

During his 300-issue run on his independent (that’s self-published, to the literary crowd) comic book Cerebus, he used the titular character as an outlet to complain about many grievances he had about the world, most notably the role of women in it. Sim was not a happy guy when it came to women, during this time, and he made no secret about it. Of course, he was going through an ugly divorce from his wife, so it’s somewhat understandable. It doesn’t really excuse the way he took a dump on women in general in his book, but I suppose he had his reasons.

Still, despite his somewhat misogynistic words, I still find – even to this day – that I have to admire the guy. Why? Because he wrote what he wanted.

There’s a lesson in there, right? I mean, I may not agree with his perspective, but he wrote the story he wanted to write, and if readers didn’t like it, that was their fault. It reminds me of a response another writer (Rick Remender) gave to a fan, who’d written an opinion letter saying that Remender was not writing a beloved character the way that the fan thought he should be written. I’m going to paraphrase Remender’s response to this, but it was, essentially:

I am writing this story. Not you. So shut up.

Man, that response gives me wonderful chills every time I think of it. I’m going to write it again just for that reason.

I am writing this story. Not you. So shut up.

I read a lot of articles and blog posts and comments from, about, and to writers, many of whom seem to be slogging through the same drama I am: writing a novel, which we hope we can sell, of course, but that’s not all there is to it.

Many of us are in love with our stories. I know I am. But, like love for anything, there comes with it a deep sense of trepidation. Are we doing what’s best? Are we doing it right? Are we going to be hurt when we put this out there for everyone to see? The answers, of course, are yes, yes, and – sadly – yes. But I think that we can take a lesson from the bastards out there.

Of course, there is value in writing for your audience. And we can’t all be Dave Sim or Rick Remender, able to write whatever in Hell we choose because people will buy the work regardless due to brand loyalty or whatever.

The video above is of the Muppet performers singing “Just One Person”, from Snoopy! The Musical, at Jim Henson’s memorial service. If you can watch it and listen to those words without tearing up at least a little bit, I don’t think I want your support.

No matter what you create, you owe it to yourself to trust in your own vision. Be willing to take advice and criticism, and be willing to listen to other people who have the good of your story at heart, even if the words they have to say may be harsh to your ears. But always remember that this is your work. And if you don’t love it first…well, no one else will.

“Nobody wants to hear your boring f***ing origin story!”

I grew up reading and watching and listening to stories about aliens who used their otherworldly powers to protect, charismatic billionaires who donned masks to fight crime, ancient warrior women who pledged to uphold virtue and truth. Their stories are fantastic and full of imagination, and a great outlet for a young, idealistic mind searching for meaning in a world that can be very confusing and intimidating.

Sometime during the 1980s (at least in my reading), superhero stories started to become more realistic. They became grimier, darker, exposing more clearly the layers of society that necessitated their own existence: drugs, gangs, perversion. These things all existed during the Golden Age of the superhero, of course, it just hadn’t been painted for us so starkly, for the most part. (Again, this was only in my regular reading library of titles. I had yet to graduate from the more idyllic stories of Superman to the starker ones of The Shadow.)

But that’s not my point.

As these superhero stories became more realistic, so did the heroes themselves. They were, more often than not, flawed in such ways that we could recognise in them the weaknesses of ourselves. Some were vainglorious bastards who relished a bit too much in pounding petty crooks to a pulp; others were simply snide smartasses who spent more time mocking their teammates than actually doing any good. One example of these was “Mystery Men,” created by Bob Burden and later adapted into the 1999 film of the same name. It’s got a very neat B-list cast of character actors doing a pretty good job of telling the story of the formation of a misfit superhero team. Another film came out around the same time (2000), called “The Specials.”

“The Specials” doesn’t have quite the star power of “Mystery Men” (Rob Lowe is the main actor attraction, though he’s supported well by Thomas Haden Church, Judy Greer, and Jamie Kennedy)…but it does have one line that has always stuck with me. At one point, the leader of The Specials (The Strobe, played so genuinely John Wayne by Church that the character is almost depressing) decides to bring the group together by telling his origin story. Every superhero’s got one, of course: how he or she developed their super powers and what made him or her decide to become a hero. During the middle of this, potty-mouthed upstart Amok (Kennedy) interrupts:
“Nobody wants to hear your boring fucking origin story!”

Now, all of that explanation above was just for me to say, that is what I often think others feel about my own writing: Nobody wants to hear my boring fucking story.

I think a lot of writers probably have these moments, when we’re floundering in the deep end of the pool, wondering just why the heck we bother. There are a million (more!) other stories out there, commanding attention, garnering praise, offering insight. So why do we bother? Why do we insist on struggling through the pages of plot and dialogue and description, when there are already far better and wider-reaching works than our own?

Because I’ve always been inspired by heroes. I’ve always read stories about Superman and Wonder Woman and Spider-Man, and I’ve always thought how fantastic it might be, to look up in the sky and see one of them swinging or flying overhead. What a beautiful world, to find adventure and romance and miracles in everyday existence. Not because you’d have super powers or see other people running around with super powers. But because those heroes made me appreciate life, appreciate love, appreciate all good things. And when I really thought about it, I realised: it’s not about the superhero. It’s not even about the hero, really. It’s about the story. The story that moves and teaches and opens us up to something greater than ourselves.