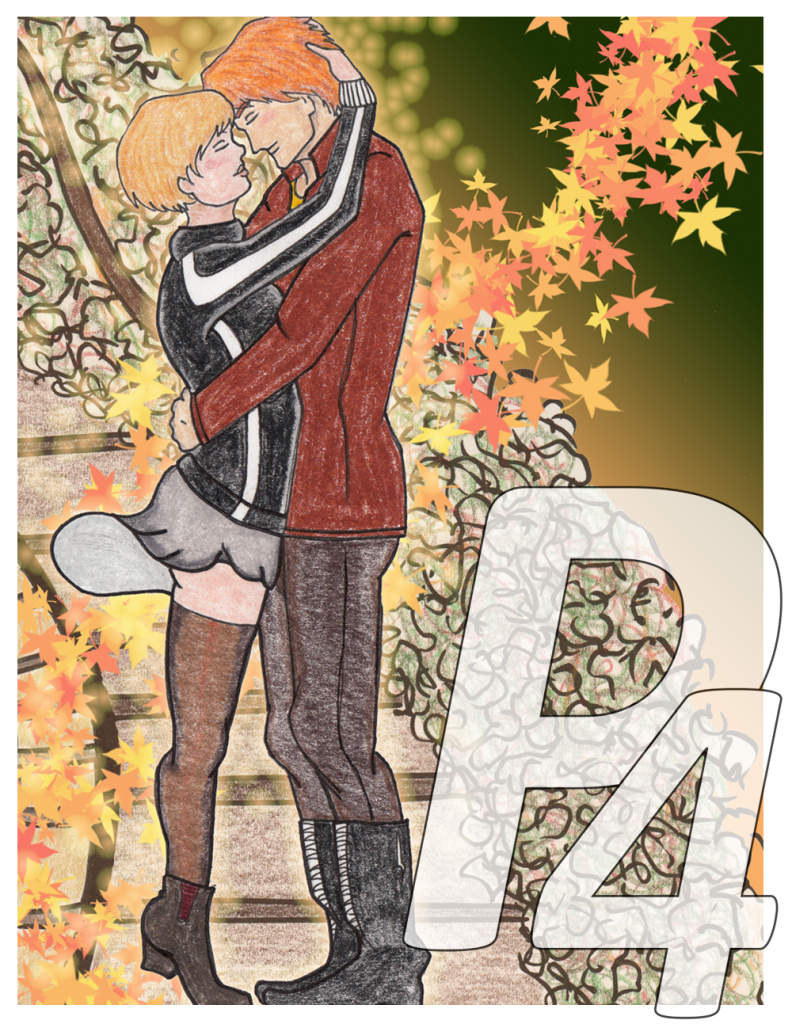 In early 2009, the videogame “Shin Megami Tensei Persona 4”, by game developer Atlus, stole over 100 hours of my life. It also stole a little piece of my heart.

The game follows mostly-silent protagonist Seta Souji/Narukami Yu, but I identified with high-kicking girl sidekick Satonaka Chie. Chie was a tomboy. She trained hard. She fought monsters to protect her friends. She ate steak like a wolverine. And she bullied the boy she liked because she wasn’t confident enough to just be herself around him, and let herself be open to her tenderer emotions. At least, that was the way I played it.

From 2009 until 2012 or so, the characters of P4 took over my imagination, prompting me to write the massive serial “1 More Chance!”. This story is the centerpiece of my version of events that take place about 5 years after the end of the game (2017-2018). It focuses on Chie and her relationships with her friends and family, but everyone has a role and a subplot, if you look hard enough.

1 More Chance! is out-of-control long – it’s over 1000 pages. I could get that to a more reasonable number with some editing (which the story certainly could use)…but I wrote it as a kind of prose-manga, designed to be consumed in pieces over a long period of time. The characters are also quite sexual. I debated going back and softening some of those scenes, but as with all of my older stories, I decided that it is what it is and who was I to pass judgment on my younger, more indulgent self?

1 More Chance! occupies center stage in my P4 universe, but it is not alone. I wrote a few stories focused on some of the other characters. A few hits, a few misses, and a lot in-between. Use the links to check them out while I work on getting 1 More Chance! ready for reading again.

Links to each of the Arcs – there’s 4 of them – or possibly each of the chapters will go here. Let me know in the comments how you’d like to see them! This archive is for you, after all.

Each link will take you to a standalone post for these stories.

1000 Words : The kanji for her name means 1000 Words, but for Yousuke, even that’s not enough to fully describe Satonaka.

Firebrand : It doesn’t much matter, in the end. End of term, 2012, and Yukiko and Souji on the rooftop of Yasogami High.

I Can’t : They say it so many times, they can almost believe it. Kanji and Rise.

The Unhidden Truth : Rise is a liar. Naoto knows this.

Run : Ai never ran anywhere, until it was too late.

Writing Year in Review: 2019 Aside from publishing "Number Seven and the Life Left Behind," my thriller novella, I didn't achieve any writing milestones in 2019. On the other hand, I did write several thousand words in my sci-fi action novel, Riding Through the Dark....

END_OF_DOCUMENT_TOKEN_TO_BE_REPLACED

Beginnings and Woes For many moons, I railed against the first-person point of view. That might have been influenced by Beverly Cleary, who used it to great effect in the children's books that filled my youth. I associated first-person narrative with books directed at...

END_OF_DOCUMENT_TOKEN_TO_BE_REPLACED

Some of you may know that I'm a videographer and video editor at my day job. On occasion, one professional life can carry over into another. When I published my novella, "Number Seven and the Life Left Behind", at the beginning of the year, I also made this little...

END_OF_DOCUMENT_TOKEN_TO_BE_REPLACED

This week's Saturday Sentence Challenge prompt over at the #TeamWriter Facebook Page was: I am so very happy to see him come back all in one piece. The first thing that struck me about this prompt? How the words should evoke a feeling of happiness or relief. However,...

END_OF_DOCUMENT_TOKEN_TO_BE_REPLACED

I'd had a Goodreads account for a while, but I hadn't really used it. It felt like yet another social media commitment for which I have increasingly shrinking time. But a fellow writer and friend of mine - Christopher Mari (check out his books via the link) -...

END_OF_DOCUMENT_TOKEN_TO_BE_REPLACED

I've talked about writing coach/author/editor Kate Johnston's Team Writer Saturday Sentence Challenge before. Briefly, each week, Kate offers members of the group a boring or grammatically-troubled sentence which we are tasked with sprucing up. The challenge is...

END_OF_DOCUMENT_TOKEN_TO_BE_REPLACED

The quote above was originally submitted for a #1LineWed offering on June 13, 2018.  It comes from my original character Darya in "Number Seven and the Life Left Behind" and it gave me trouble in every single edit of the story. Every character needs their own...

END_OF_DOCUMENT_TOKEN_TO_BE_REPLACED

Art commission of my original character Anan by Techycutie. This version is not as dark as Anan is described in the story, but that's more my fault than the artist's, since I was probably not specific enough about that. What's fun about seeing an artist's take on an...

END_OF_DOCUMENT_TOKEN_TO_BE_REPLACED

The Eve and Alan characters are new to me. I'm still feeling my way around them and their post-WWII world. I already like them, though, and they're already forming a story for themselves. Love (and sex) play a part because that's how they first came to my mind. A few...